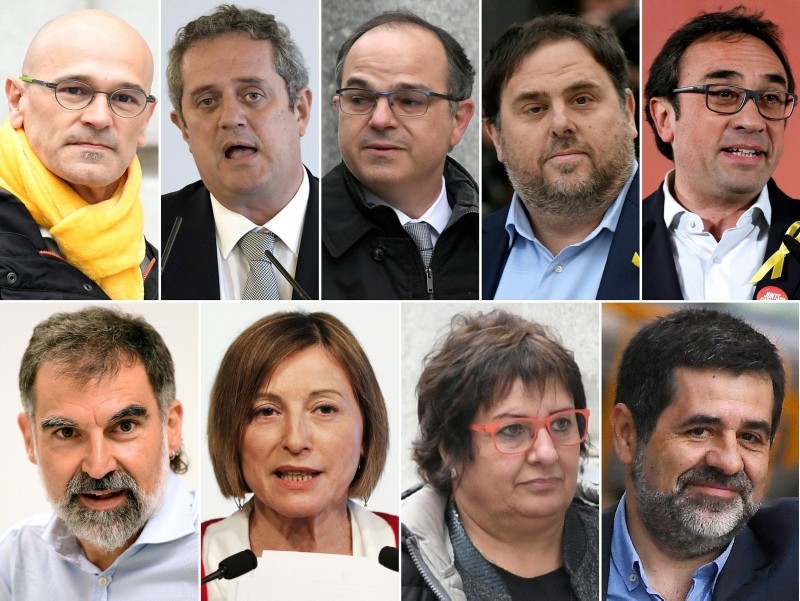 Spanish prosecutors have called for former Catalan Vice President Oriol Junqueras to be imprisoned for 25 years on charges of rebellion and misuse of public funds, the highest prison term being sought for separatist leaders who pushed for Catalan independence last year.

The formal bill of indictment issued Friday by Spain's Public Prosecutor seeks fines or imprisonment for 22 politicians, activists and civil servants accused of organizing the push to break away from Spain, including holding a banned referendum.

But state attorneys, who represent the central government's interest in the case, called for rebellion to be dropped in favor of the lesser charge of sedition, which under Spanish law doesn't imply that violence was used to subvert the state or the country's constitution.

The different criteria could have limited effect in the trial, but the lesser charge request is seen as a sign of how the center-left government of Prime Minister Pedro Sanchez needs support in parliament from separatist parties to pass the national budget and remain in power.

Both prosecuting parties accused Junqueras as the main promoter of the illegal referendum, alongside 11 other politicians, activists and civil servants also charged by the public prosecutor with rebellion for using "the necessary violence to ensure the criminal outcome sought."

One year later, most of those involved are either indicted or have fled the country. A new Catalan separatist administration has kept up a defiant pro-independence rhetoric but hasn't broken the law.

Spain's Supreme Court wrapped up last month the probe into 18 politicians and activists for their links to the turbulent events.

Four more officials who were in charge of the regional police are being investigated in the country's National Court and were also indicted on Friday, with prosecutors calling for 11 years of imprisonment for the former regional police chief, Josep Lluis Trapero.

Both trials are expected to begin in early 2019.

Friday's highly expected indictment didn't involve the Catalan politicians who have fled the country, including the former regional president, Carles Puigdemont, who now lives in Belgium and Spain is considered a fugitive.

Junqueras, who stayed in Spain and was jailed preventively exactly one year ago, could also face a ban from holding public office for the next 25 years if the judges agree during the upcoming trial.

The second-highest prison terms in the indictments — 17 years — were for Jordi Cuixart and Jordi Sanchez, activists who at the time headed two civil society groups pushing for Catalan independence, and also for Carme Forcadell, who was the Catalan parliament's speaker.

Weeks after the banned referendum went ahead amid violence against voters when police tried to stop it, Forcadell presided over a tense house session where a narrow separatist majority of lawmakers passed an independence declaration.

The declaration didn't have any immediate effect and instead prompted central authorities to move swiftly to take over control of Catalonia.