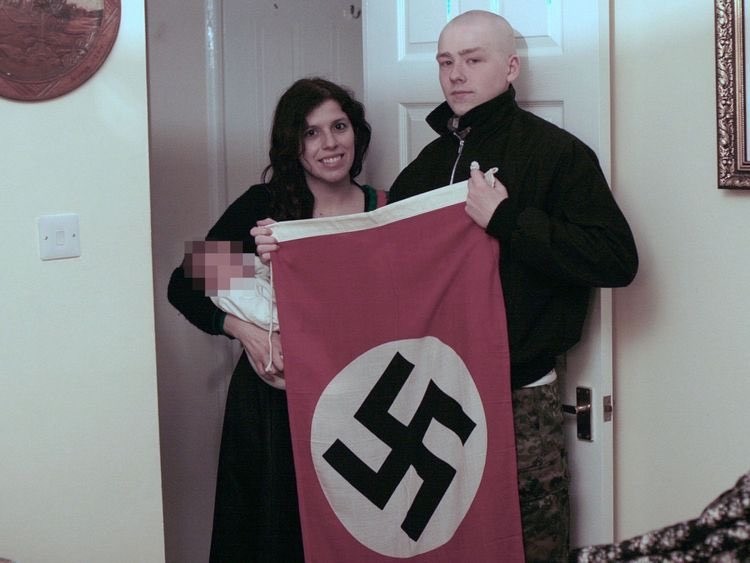 Claudia Patatas and Adam Thomas pose for a with their baby while holding a flag of Nazi Germany. (Photo: West Midlands Police/PA)
by Compiled from Wire Services Nov 12, 2018 12:00 am

A British couple with neo-Nazi views who named their son after Adolf Hitler have been convicted of membership of an outlawed far-right group.

A jury at Birmingham Crown Court in central England on Monday found 22-year-old Adam Thomas and 38-year-old Claudia Patatas from Banbury in south England guilty of being members of National Action. A third defendant, 27-year-old Daniel Bogunovic from Leicester, was also convicted.

During the trial, jurors were shown photos of Thomas holding his baby son — who was given the middle name Adolf — while wearing the white robes of the racist Ku Klux Klan.

Thomas claimed the photographs were "just play" but also told the court he was a racist.

Prosecutors said Thomas had a "fanatical and tribal belief in white supremacy".

The neo-Nazi group was founded in 2013 and the government banned National Action in 2016 after Labour Party lawmaker Jo Cox was murdered by a far-right extremist in northern England.

The anti-Semitic and white supremacist group had celebrated the murder of Labour MP Jo Cox in June 2016 by Thomas Mair.

The group describes itself as a "National Socialist youth organization". However, then-Home Secretary Amber Rudd described it as "racist, anti-Semitic and homophobic."

"It has absolutely no place in a Britain that works for everyone," she added.

"The Midlands branch of NA, which is just 17-20 of us, have decided to ignore this and we've renamed ourselves the Thule Combat League," he wrote.

The jury is still considering another count alleging Thomas had a copy of terrorist manual the Anarchist Cookbook.