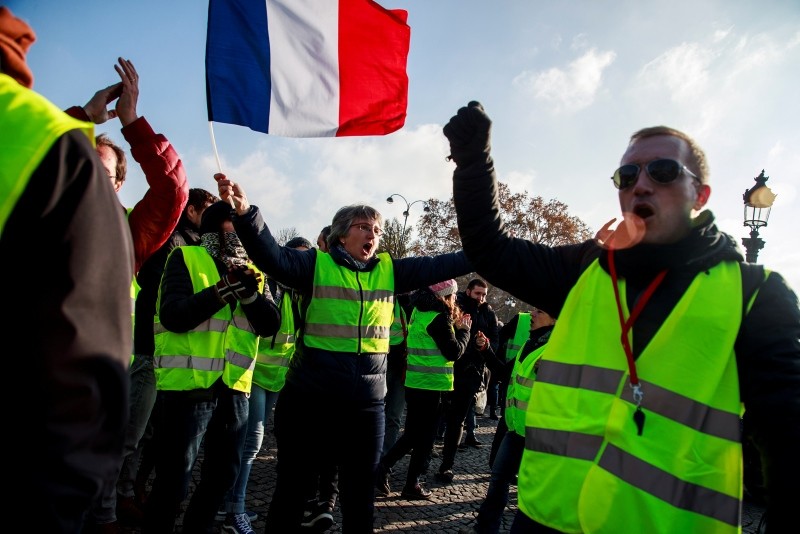 More than 400 people were hurt, 14 seriously, in a day and night of "yellow vest" protests over rising fuel price hikes around France that claimed one life, Interior Minister Christophe Castaner said on Sunday.

The injury toll, more than double the last tally provided on Saturday, followed what Castaner described as a "restive" night in 87 locations around the country where protesters had blocked roads to express their anger at a series of hikes in petrol tax.

The injured, 409 in total, included 28 police, paramilitary police or firefighters.

There were more protests Sunday in several regions across France, leading to traffic disruptions, but their intensity seemed to be diminishing, according to AFP journalists.

But French retail group Auchan reported violent incidents at around 20 shopping centres where it operates hypermarkets.

Castaner told RTL radio that 288,000 people had taken part in Saturday's protests at 2,034 locations countrywide. About 3,500 stayed out overnight, he added.

Police questioned 282 protesters in total, 73 during the night, of whom 157 were taken into custody.

"Last night was restive... There were assaults, fights, stabbings," Castaner said. "There were fights among 'yellow vest' protesters. There was a lot of alcohol at certain venues, which led to this idiotic behaviour."

Budget Minister Gerald Darmanin said Sunday the government was aware of unhappiness over high fuel taxes, but said it had "a duty" to transform the French economy with the aim of making it less oil-dependent.

A poll published Sunday in the Journal de Dimanche weekly said that 62 percent of those questioned believed their purchasing power was more important than a fast transition towards renewable energy.

Prime Minister Edouard Philippe was to appear on national TV Sunday evening to discuss the protests.

On Saturday, groups blocked roundabouts, major highways and thoroughfares to express anger over increased taxes on fuel and their shrinking purchasing power under President Emmanuel Macron.

Tempers flared at times as some drivers confronted the protesters or tried to force their way through the barricades.

In the eastern Savoie region, authorities said a woman trying to get her daughter to a doctor panicked after protesters surrounded her car and banged on the roof. She accelerated into the crowd and killed a 63-year-old woman.

The driver was on Sunday charged with manslaughter before being released on conditional bail, prosecutors said.

The protesters are nicknamed "yellow vests" for the high-visibility jackets they wear.

The survey was conducted November 9-17 with 1,957 respondents.