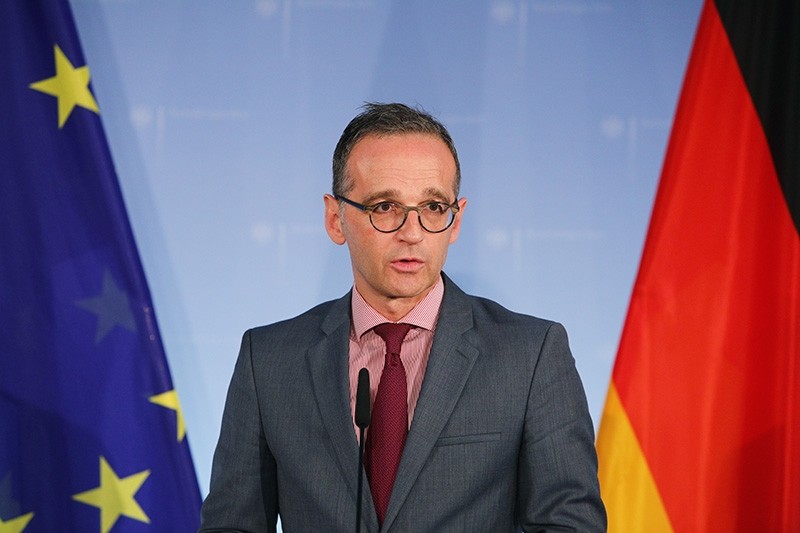 German Foreign Minister Heiko Maas delivers a statement to the press at the German Ministry of Foreign Affairs, in Berlin, Germany, Nov. 15, 2018. (EPA Photo)
by Compiled from Wire Services Nov 19, 2018 12:00 am

Berlin has banned 18 Saudi nationals from entering Europe's border-free Schengen zone because they are believed to be connected to the killing of journalist Jamal Khashoggi, German Foreign Ministry said on Monday.

Heiko Maas told reporters in Brussels that Germany issued the ban for the 26-nation zone in close coordination with France, which is part of the Schengen area, and Britain, which is not.

"As before, there are more questions than answers in this case, with the crime itself and who is behind it," Maas said.

Maas told the 18 are Saudis who are "allegedly connected to this crime" but gave no further information.

The ministry said they can't release the names due to German privacy protections.

Saudi Arabia has come under pressure from the international community to provide more information on the incident.

The Foreign Ministry in Berlin last week called on Saudi Arabia to conduct a seamless and transparent investigation after Riyadh announced it had charged 11 people in Khashoggi's case.

Khashoggi, a Saudi who lived in the United States, was a columnist for the Post and often criticized the royal family. He was killed Oct. 2 at the Saudi Consulate in Istanbul. Turkish and Saudi authorities say he was killed inside the consulate by a team from the kingdom after he went there to get marriage documents.

This past week, U.S. intelligence officials briefed members of the Senate and House intelligence committees, and the Treasury Department announced economic sanctions on 17 Saudi officials suspected of being responsible for or complicit in the killing.

Among those targeted for sanctions were Mohammed al-Otaibi, the diplomat in charge of the consulate, and Maher Mutreb, who was part of the crown prince's entourage on trips abroad.

The sanctions freeze any assets the 17 may have in the U.S. and prohibit any Americans from doing business with them.

Also this past week, the top prosecutor in Saudi Arabia announced he will seek the death penalty against five men suspected in the killing. The prosecutor's announcement sought to quiet the global outcry over Khashoggi's death and distance the killers and their operation from the kingdom's leadership, primarily the crown prince.