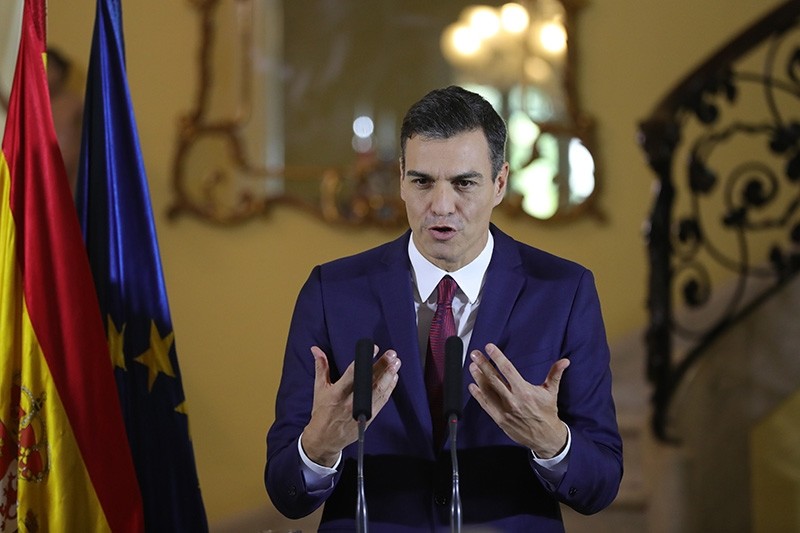 Spain's Prime Minister Pedro Sanchez warned Friday there would "very probably" be no summit to approve Britain's exit from the European Union on Sunday if the thorny issue of Gibraltar is not first resolved.

Madrid is seeking a guaranteed veto on post-Brexit relations between the EU and Gibraltar, the British enclave on Spain's southern tip, and has threatened to scupper the draft Brexit deal if it doesn't get its way.

"If there's no agreement" over Gibraltar, said Sanchez at a press conference in Cuba, "there very probably won't be a European Council" summit.

Earlier on Friday, Spanish officials in Brussels said Sanchez might not attend the summit if London fails to put into writing a promise that no future agreement between Britain and the EU that applies to Gibraltar can be signed without first being negotiated on a bilateral basis with Spain.

That would effectively give Spain the power of veto over any future relations between the EU and the 2.6-square-mile (6.8-square-kilometer) British territory on its southern tip.

Sanchez wouldn't confirm that threat to skip the summit but said current "guarantees are not enough and so Spain maintains its veto on the Brexit deal."

Spain wants the future of the tiny territory, which was ceded to Britain in 1713 but is still claimed by Spain, to be a bilateral issue between Madrid and London.

Last year's EU guidelines on the Brexit negotiations effectively gave Spain veto powers over future relations between the bloc and the British overseas territory. But Spanish officials are concerned that a key clause in the agreement referring to U.K.-EU negotiations on their future relationship makes no mention of Gibraltar.

Spanish government spokeswoman Isabel Celaa said Spain required an "absolute guarantee" that any future agreement between the EU and the U.K. in matters regarding Gibraltar "will require the prior agreement of Spain."

Spain's junior minister for the European Union, Luis Marco Aguiriano, said Friday that British authorities had made a commitment to address Spain's concerns on Gibraltar, but that he had not yet seen it in writing.

"We have a promise, a commitment, from the British government saying they are ready to ... guarantee that they will go along with the clarification we have requested," he said.

After a meeting in Brussels Friday of senior EU officials, the Spanish government said negotiations were continuing but not enough progress had been made to drop the veto threat.

Britain and the EU say the withdrawal agreement won't be changed but haven't ruled out putting something in writing to allay Spain's fears.

"Spain is the physical and geographical gateway to Europe for Gibraltar," Picardo told the BBC. "We recognize that and there is absolutely no need for us to be vetoed into being brought to the table."

Chancellor Angela Merkel's spokesman said Germany believed outstanding questions would be cleared up in time for Sunday's summit to go ahead.

"We assume that open questions can be cleared up by Sunday," spokesman Steffen Seibert said. "That is being worked on intensively, so the chancellor is preparing for the trip to Brussels."

If EU leaders sign off on the deal, it needs to be approved by the European and British Parliaments — a tough task for May, whose Conservatives lack a majority in the House of Commons.

May answered calls on a radio phone-in show Friday in a bid to win public support for the divorce deal, which has been slammed by pro-Brexit and pro-EU politicians alike.

Brexiteers think the agreement will leave the U.K. tied too closely to EU rules, while pro-Europeans say it will erect new barriers between Britain and the bloc — its neighbor and biggest trading partner.

May declined to say when asked by a caller whether she would resign if the deal was rejected by Parliament.

She warned that rejecting the deal would lead to "more uncertainty and more division" and could result in Britain crashing out of the bloc without agreement — an outcome feared by many businesses.

"If this deal doesn't go through what happens is, we end up back at square one," May said.