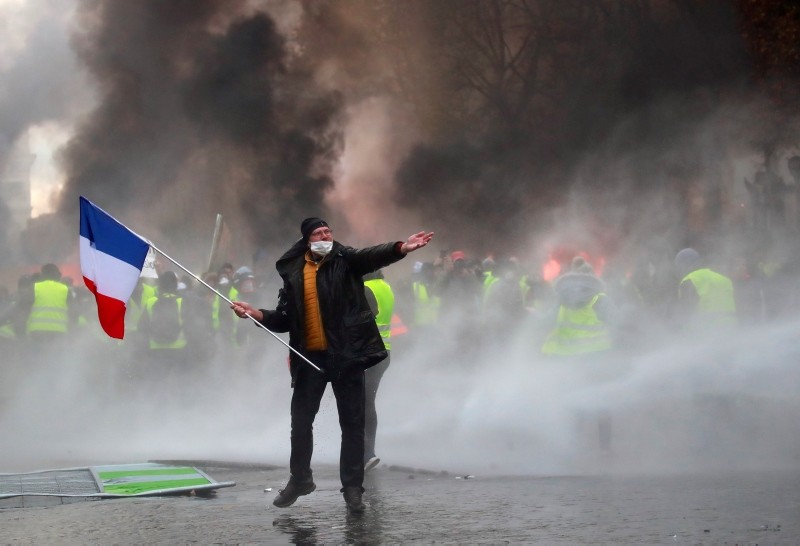 Protesters wearing yellow vests, a symbol of a French drivers' protest against higher fuel prices, are seen during riots on the Champs-Elysees in Paris, France, November 24, 2018. (Reuters Photo)
by Associated Press Nov 24, 2018 12:00 am

French police fired tear gas and water cannons to disperse violent demonstrators in Paris on Saturday, as thousands gathered in the capital and beyond and staged road blockades to vent anger against rising fuel taxes.

Thousands of police were deployed nationwide to contain the eighth day of deadly demonstrations that started as protests against tax but morphed into a rebuke of President Emmanuel Macron and the perceived elitism of France's ruling class. Two people have been killed since Nov. 17 in protest-related tragedies.

Tense clashes on the Champs-Elysees on Saturday saw police face off with demonstrators who burned plywood, wielded placards reading "Death to Taxes" and upturned a large vehicle.

At least 20 people, including four police officers, were injured in the day of unrest in Paris, according to police. One person sustained a serious hand injury.

Police said that dozens of protesters were detained for "throwing projectiles," among other acts. In the Place de la Madeleine, scooters were burned to blackened shells.

"It's going to trigger a civil war and me, like most other citizens, we're all ready," said Benjamin Vrignaud, a 21-year-old protester from Chartres.

The famed avenue was speckled with plumes of smoke and neon — owing to the color of the vests the self-styled "yellow jacket" protesters don. French drivers are required to keep neon security vests in their vehicles.

Authorities said that 5,000 protesters flooded the Champs-Elysees at the demonstration's peak that had dwindled by dusk. There were nearly 81,000 protesters in total nationwide.

Interior Minister Christophe Castaner denounced protesters from the far-right whom he called "rebellious," as he accused National Assembly leader Marine Le Pen of encouraging them.

But the Interior Ministry played down the scale of Saturday's demonstrations by highlighting that up to 244,000 people took part in last Saturday's protest. Authorities noted that no banks or boutique windows were targeted unlike the violent May Day demonstrations earlier this year.

The unrest is proving a major challenge for embattled Macron, who's suffering in the polls.

The leader, who swept to power only last year, is the focus of rage for the "yellow jacket" demonstrators who accuse the pro-business centrist of elitism and indifference to the struggles of ordinary French.

Macron has so far held strong and insisted the fuel tax rises are a necessary pain to reduce France's dependence on fossil fuels and fund renewable energy investments — a cornerstone of his reforms of the nation. He will defend fresh plans to make the "energy transition" easier next week.

Paris deployed some 3,000 security forces on Saturday, notably around tourist-frequented areas, after an unauthorized attempt last week to march on the presidential Elysee Palace.

Police officials said that a no-go zone, set up around key areas including the presidential palace and the National Assembly on the Left Bank of the Seine River, has not been breached.

But authorities are struggling because the movement has no clear leader and has attracted a motley group of people with broadly varying demands.

The anger is mainly over a hike in the diesel fuel tax, which has gone up seven euro cents per liter (nearly 30 U.S. cents per gallon) and will keep climbing in coming years, according to Transport Minister Elisabeth Borne. The tax on gasoline is also to increase four euro cents. Gasoline currently costs about 1.64 euros a liter in Paris ($7.06 a gallon), slightly more than diesel.

Far left leader Jean-Luc Melenchon explained to BFMTV the historical importance of this issue in the Gallic mindset: "When tax is no longer agreed to, it's the start of revolutions in France."