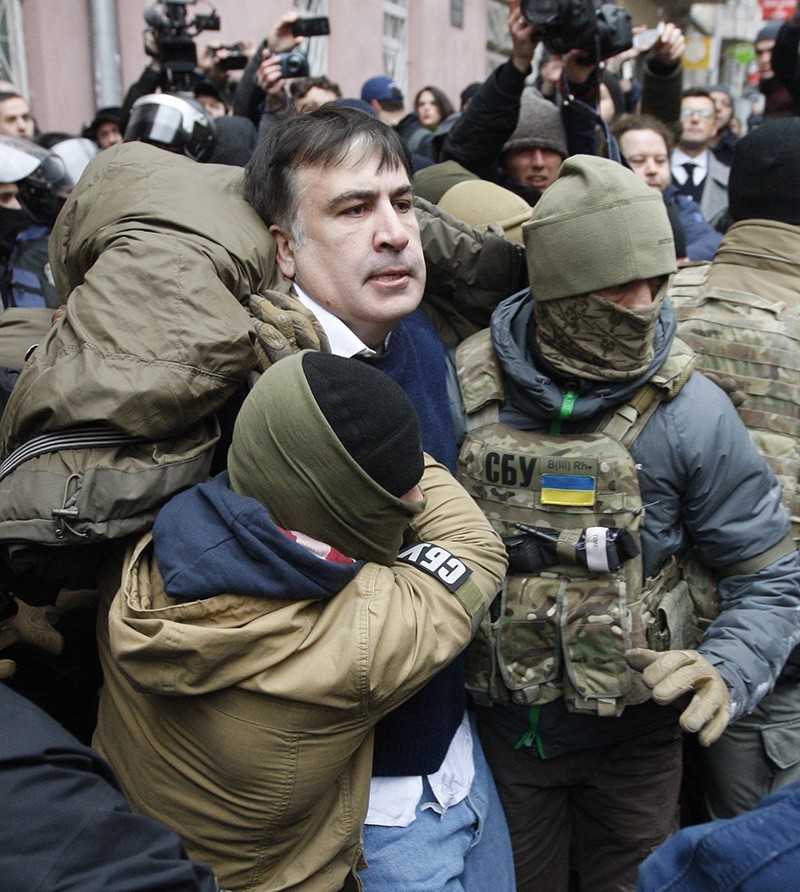 Former Georgian President Mikhail Saakashvili, who now lives in the Netherlands, said that he intends to return his country if the main opposition United National Movement (UNM)'s candidate Grigol Vashadze wins in the second round of the presidential elections held on Nov. 6.

Saakashvili, who is being sought with an arrest warrant in his country as well as in Ukraine, said that he does not want to be president or prime minister and he will support the formation of a possible coalition.

Saakashvili told Georgia's Rustavi-2 TV channel that he will run maritime projects if he returns to Georgia, in order to make his country a marine hub.

He also said that a free trade zone should be established in Lazika near the under-construction Anaklia Deep Sea Port by the Black Sea.

"My intention is to make Georgia a giant maritime country. I want to run the Lazika free trade area and I am going to make initiations regarding this," Saakashvili said.

It is highly doubtful that Saakashvili would be allowed to run the area if he were allowed to return to Georgia since the area lies next to the territory contested with breakaway Abkhazia.

Saakashvili was the leader of mass protests dubbed the "Rose Revolution" in 2003 that removed former President Eduard Shevardnadze, who had led Georgia since its independence from the Soviet Union in 1992. A series of mass protests resulting in the replacement of autocratic pro-Russian regimes known as "Color Revolutions" – reportedly backed by various NGO's funded by the EU and the U.S. including billionaire George Soros' Open Society Foundations – also took place in Russia's sphere of influence in early 2000s. These included protests in Yugoslavia, Ukraine and Kyrgyzstan in 2000, 2004 and 2005, respectively, prompting Russia to adopt a more hardline stance in regional politics.

Saakashvili was elected president in January 2004 and held this post until late 2013. While his first term was praised for reforms and economic growth, Saakashvili's second term was marked by an invasion from Russia in 2008 – triggered by his ethnic policies in Abkhazia and South Ossetia, and Russian aim to show muscle in the region – social unrest and corruption allegations.

Facing multiple probes at the end of his term, Saakashvili left Georgia after the current President Giorgi Margvelashvili's victory and came to Ukraine, which soon faced pro-EU protests and toppling of pro-Russian President Viktor Yanukovych in 2014. As an ally of incumbent President Petro Poroshenko, he was appointed governor of the southern Odessa region and formed the opposition Movement of New Forces party. He resigned from that post in 2016 and harshly criticized Poroshenko for failing to stem corruption. He even called on his supporters to rally in Kiev's main square to demand Poroshenko's impeachment.

Saakashvili was stripped of his Ukrainian citizenship while in the U.S. earlier this year, rendering him stateless. However, in September he crossed into Ukraine from Poland with the help of supporters, only to be returned weeks later. His Georgian citizenship was removed when he took up Ukrainian nationality in 2015.

In the first round of Georgia's presidential election, none of the candidates were able to take the necessary half of the votes. While the government-backed independent candidate Salome Zurabishvili took 38 percent, the coalition candidate of the opposition Grigol Vashadze took 37 percent.

The second round of the presidential election will be held on Nov. 28.