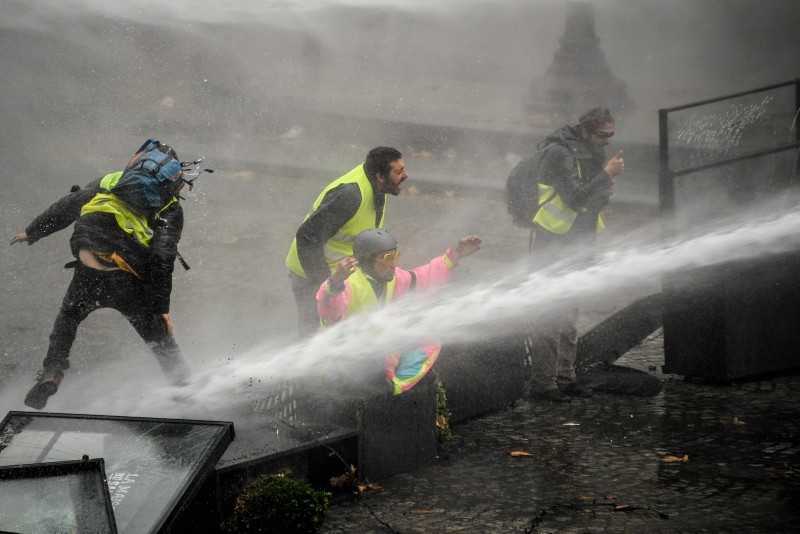 Yellow vests (Gilet jaune) protestors are showered by a water cannon near the Place de la Concorde in Paris, on November 24, 2018, during a protest against rising oil prices and living costs. (AFP Photo)
by Compiled from Wire Services Nov 26, 2018 12:00 am

The pressure is on French President Emmanuel Macron after a second weekend of sometimes violent protests over rising fuel taxes that reached the heart of Paris.

Scattered protests continued Monday as drivers blocked roads from the Pyrenees to Brittany.

Macron promised to explain on Tuesday his plans for weaning France off fossil fuels, the reason for the small tax hikes.

A local protest leader in Toulouse, Benjamin Cauchy, said Monday on BFM television that the movement is at a turning point and the next step will hinge on what Macron has to say.

Cauchy said protesters should respect the media, after journalists were attacked, chased or threatened while covering Saturday's events.

Protesters clashed with French police on the Champs-Elysees in Paris on Saturday, leaving the area cloaked in tear gas and soaked from water cannons.

Police arrested 130 people, 69 of those in Paris, and 24 people were injured, five of them police officers including one who suffered burns to his groin, the city police department and Interior Minister Christophe Castaner said.

Macron, targeted by protesters' calls that he resign, took to Twitter to thank police.

"Shame" on those who assaulted or intimidated citizens, journalists and politicians, Macron said. "There is no place for violence in the (French) Republic."

The violence was on a smaller scale than a week ago when the "yellow vest" movement staged its first nationwide protest.

"We have just demonstrated peacefully, and we were teargassed," said Christophe, 49, who travelled from the Isere region in eastern France with his wife to protest in the capital.

The interior ministry counted 106,000 protesters across France on Saturday, with 8,000 in Paris, of whom around 5,000 were on the Champs-Elysees.

Opposition parties on both the right and left accused the government of trying to reduce the protests to just the sporadic scenes of violence, and turning a deaf ear to the demonstrators' grievances.

A week ago, two people died and over 750 people, including 136 police officers, were injured in sometimes violent demonstrations that have shone a light on frustrations in many rural areas and small towns of France.

The "yellow vests" hail overwhelmingly from non-urban areas of France. They feel overlooked and penalised by policies they see as being pushed through by elitist politicians in Paris.