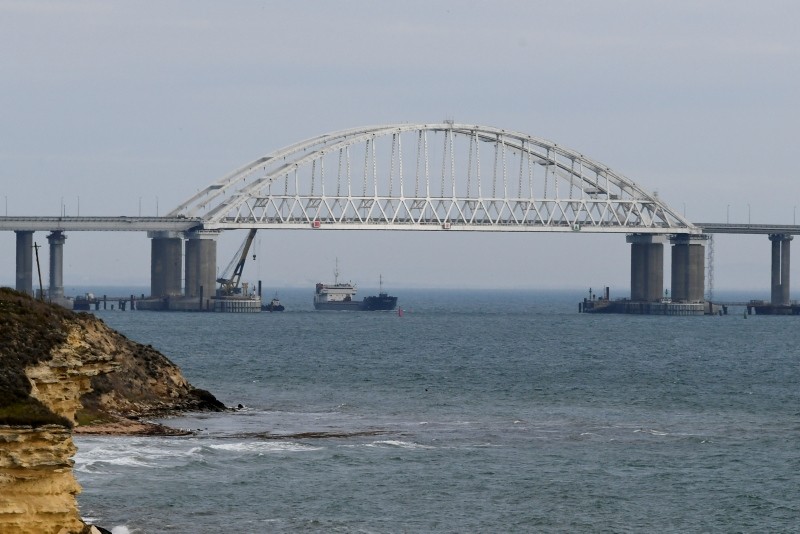 Ukrainian lawmakers voted on Monday to back a proposal by President Petro Poroshenko to introduce martial law for a period of 30 days in areas of the country most vulnerable to an attack from Russia.

They also voted to confirm that Ukraine would hold presidential elections on March 31.

Ahead of the parliamentary vote that overwhelmingly supported his motion for a 30-day period of martial law, Poroshenko said martial law will only affect ten of Ukraine's 27 regions. The regions picked are the ones that he identified as potentially in the front-line of any Russian strike.

Poroshenko said it was necessary because of intelligence about "a highly serious threat of a ground operation against Ukraine." He did not elaborate.

"Martial law doesn't mean declaring a war," he said. "It is introduced with the sole purpose of boosting Ukraine's defense in the light of a growing aggression from Russia."

Ukraine's Defense Ministry already announced earlier in the day that its troops were on full combat alert in the country.

The approved measures included a partial mobilization and strengthening of air defenses. It also contained vaguely worded steps such as "strengthening" anti-terrorism measures and "information security" that could curtail certain rights and freedoms.

But Poroshenko also pledged to respect the rights of Ukrainian citizens.

Earlier on Monday Ukrainian President Petro Poroshenko signed a decree to introduce martial law, a statement on his website said.

Separately, the International Monetary Fund (IMF) said introducing a martial law would have no bearing on continued IMF cooperation with Ukraine.

The decision came a day after Russia fired at and captured three Ukrainian vessels in Kerch Strait near Crimea, triggering a sharp escalation in tensions between the two countries.

Poroshenko said he would impose martial law throughout the country from Wednesday but said his decree did not include restrictions on citizens' rights or postponing elections slated for next year.

In a televised address, he offered parliament the introduction of martial law for 30 days instead of the 60 days his security council had originally envisaged.

"I fulfilled my constitutional duty and a few hours ago, by my decree, I imposed martial law throughout Ukraine from 9 am on November 28," he said.

Russia invaded Crimea in 2014 in the aftermath of the turbulent period when Ukraine's pro-Russian President Viktor Yanukovych was toppled after weeks of pro-European protests.

It unilaterally annexed the peninsula after a referendum in March 2014, but failed to garner international support and recognition for the move while prompting the U.S. and the E.U. to impose sanctions.

The incident in Kerch Strait has raised fears of a wider military escalation and the U.N. Security Council was to hold an emergency session Monday. NATO also called an emergency meeting on the incident.

"These were planned acts of aggression by the Russian Federation against Ukraine," Foreign Minister Pavlo Klimkin told reporters in Kiev.

"We will demand (at the Security Council) the immediate release of our sailors and the liberation of our ships."

He said talks were underway, with the European Union and others, on increasing sanctions imposed on Russia.

Moscow insisted Kiev was to blame, with Kremlin spokesman Dmitry Peskov saying: "The Russian side acted strictly within both domestic and international law."

Russian Foreign Minister Sergei Lavrov accused Kiev of a planned provocation and of using "dangerous methods" that put ships in the area at risk.

The crisis unfolded as two small Ukrainian warships and a tugboat were heading through the Kerch Strait, a waterway that gives access to the Sea of Azov from the Black Sea and which is used by both Ukraine and Russia.

Ukraine said a Russian border guard vessel rammed the tugboat and then fired on the ships, immobilizing all three. It said the Kerch Strait was blocked by a tanker and that Russian military aircraft were flying over the area.

Russia's FSB security service, which oversees border forces, confirmed weapons had been fired and the vessels seized, accusing the Ukrainian ships of "violating the Russian border".

Ukraine said six of its servicemen were injured, two seriously. The FSB said only three had suffered non-life threatening injuries and were given medical treatment.

Russian news agencies quoted port officials in Crimea as saying the strait was reopened to traffic early on Monday.

The confrontation is a dangerous development in the long-running conflict pitting Ukraine against Moscow and Russian-backed rebels in the east of the country. More than 10,000 people have died in the fighting.

France also called on Russia to release the sailors and ships, with the foreign ministry saying "nothing appears to justify the use of force" by Russia.

German Foreign Minister Heiko Maas said any Russian "blockade" of the Sea of Azov was "unacceptable".

Tensions have been building over the Kerch Strait, where Russia has built a new bridge that gives it a land connection to Crimea, annexed by Moscow in 2014.

Kiev has accused Moscow of blocking access for Ukrainian ships through the strait, the only way in and out of the Sea of Azov to the Black Sea.

In recent months both sides had deployed more naval and border vessels to the area.

"The incident marks a significant escalation of the conflict between Russia and Ukraine," research firm Eurasia Group said.

Poroshenko held a late-night meeting of his military cabinet, proposing the imposition of martial law in Ukraine "to ensure the security and safety of its citizens".

Eurasia Group said martial law could have wide-ranging domestic consequences, especially with a presidential election due in March and Poroshenko behind in opinion polls.

"Poroshenko did not take this kind of action during the worst of the conflict in 2014 and 2015. This raises concerns that... it could lead to postponement of the presidential election," it said.