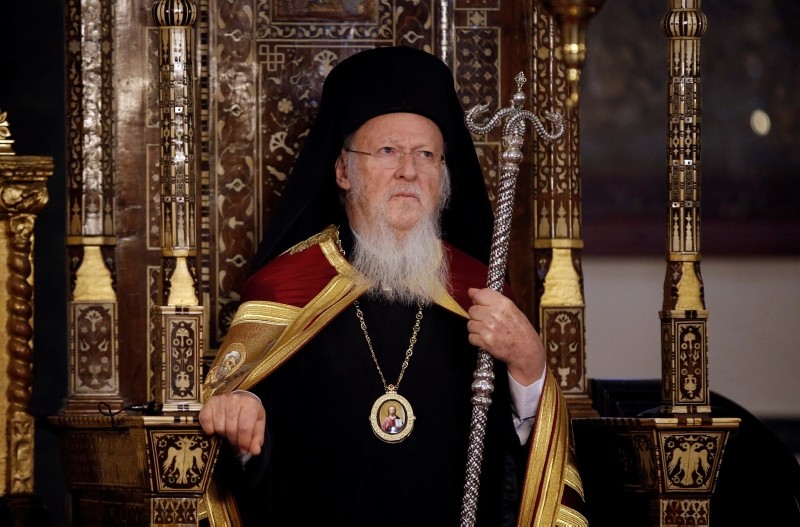 In this Wednesday, Jan. 6, 2016 file photo, Patriarch Bartholomew I, the spiritual leader of the world's Orthodox Christians listens during an Epiphany ceremony at the Patriarchate in Istanbul, Turkey. (AP Photo)
by Daily Sabah with Agencies Nov 27, 2018 12:00 am

The synod of the Greek Orthodox Patriarchate started Tuesday in Istanbul in bid to approve an official decree, called a "tomos," granting the Ukrainian Orthodox Church an autocephaly.

Under the leadership of Patriarch Bartholomew I, the patriarchate announced in October that it would grant autocephaly, or independence, to the Ukrainian Church, a move Russia has long campaigned against. The decision ended more than 300 years of Moscow's control over Orthodox churches in Ukraine and affects millions of believers in Russia and Ukraine.

In a three-day meeting, the Istanbul-based Patriarchate in historic Fener neighborhood is expected to announce the exact date when the Unification Council of the Orthodox churches of Ukraine will convene in Ukraine. The Unification Council, set to meet in December, the representatives of Ukraine's Orthodox churches will choose the patriarch of Kyiv and announce officially the creation of a single Ukrainian Orthodox Church, independent of Russia.

Rostyslav Pavlenko, the deputy chief of staff of Ukrainian President Petro Poroshenko, will also take part in the synod.

Bartholomew I is regarded primus inter pares (first among equals) of Orthodox churches across the world, including Greek, Russian, Serbian and Romanian that appeal to 300 million around the world. His degree of influence varies, but many consider him the spiritual head of the entire Orthodox faith. Unlike the rest of the world, Turkey does not recognize Bartholomew I as the Ecumenical Patriarch but just as the leader of Turkey's remaining Greek Orthodox minority.

In the biggest split in modern Orthodox history, the Russian Orthodox Church decided to sever all relations with the Istanbul-based Patriarchate in protest over its endorsement of Ukraine's request for an independent church. The religious schism between the Istanbul Patriarchate and Moscow Church marks an important new facet for the rift between Russia and Ukraine, who have become bitter enemies since the annexation of Crimea.

Since Moscow's annexation of the Crimean peninsula in 2014 and the ensuing conflict with pro-Russia separatists in east Ukraine, Kiev has been wary of the influence of the Moscow Patriarch Kirill, who is an avid supporter of the Kremlin's policies. Ukraine's government had lobbied strongly for autocephaly as part of a larger break from Russian influence. The issue has played a key role in Ukraine's March 2019 presidential elections, with incumbent Poroshenko making independence from the Russian Orthodox Church a key issue as he plans a re-election bid.