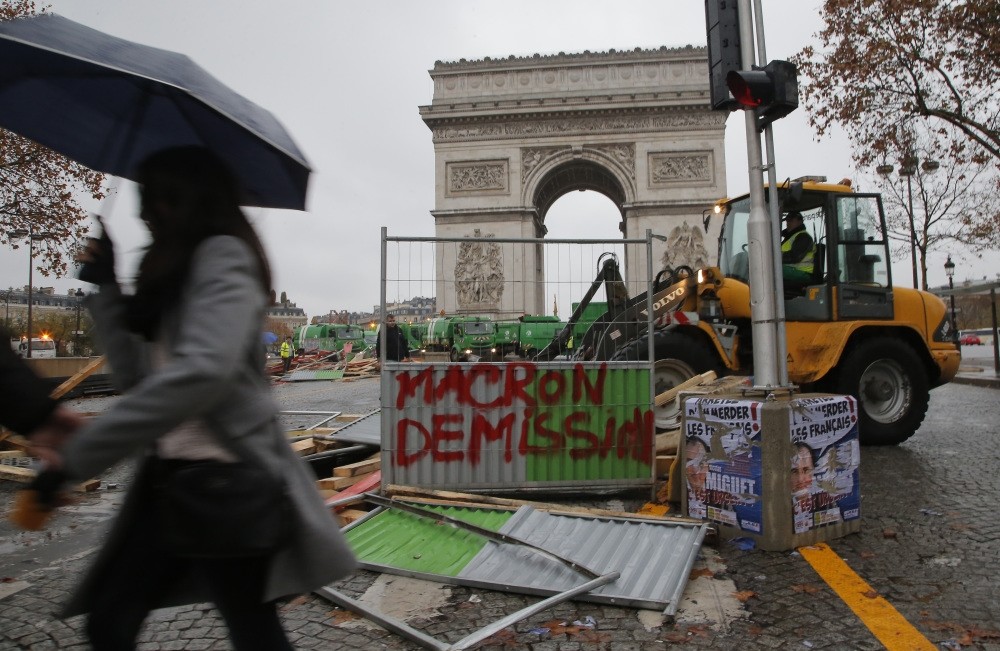 A bulldozer demolishes a makeshift barricade in the aftermath of a protest against rising fuel taxes on the Champs-Elysees avenue, Paris, Nov. 25.
by Compiled from Wire Services Nov 27, 2018 12:00 am

The pressure is on French President Emmanuel Macron after a second weekend of sometimes violent protests over rising fuel taxes that reached the heart of Paris. Scattered protests continued yesterday as drivers blocked roads from the Pyrenees to Brittany.

The protests are a major challenge for Macron, drawing disparate demonstrators with no clear leader or mission. Paris saw clashes between police and demonstrators Saturday on the Champs-Elysées where barricades were set on fire, luxury shop windows smashed, and traffic lights uprooted, creating riotous scenes reminiscent of France's 1968 civil unrest.

Some 30 people were injured and 101 arrested, police said. The government blamed much of the violence on a small minority of "ultra-right" activists. Protesters clad in fluorescent jackets, dubbed "yellow vests," have blocked highways across France since Nov. 17, setting up burning barricades and deploying convoys of slow-moving trucks, often denying access to shopping centers and some factories.

Bruno Le Maire, the economy minister, acknowledged Sunday that "the current crisis goes far beyond just a question of fuel," adding that it was important that "work be better paid" to improve living standards.

Former investment banker Macron was elected on a pledge to put more money in workers' pockets. But the effects of his pro-business reforms on unemployment and purchasing power have been limited so far. He has seen his popularity slide to just 25 percent, according to one poll a week ago.

Macron's latest dip still has him higher than former-President François Hollande's absolute low point of a mere 20 percent approval rating, and it showcases yet another example of the French quickly turning against a president they elected.

His nickname, "President of the Rich," is popular among the protesters, who say he is neglecting the middle, lower middle and working classes.

Macron's reputation has been hit by the brusque departure of two high-profile ministers and a summer scandal over his bodyguard, while stubbornly high unemployment, high taxes and rising fuel prices add to a general feeling of discontent.

Opposition leaders have been quick to note that the protests, mostly organized by grassroot protesters coordinating by way of social media rather than by traditional political parties or trade unions, have won wide popular support.

"When a movement has the backing of three quarters of French people, you give them an answer, you don't just dismiss them as a gang of thugs," Olivier Faure, the opposition Socialist Party leader told Le Parisien newspaper.

Guillaume Peltier, a leader of conservative The Republicans party, told the daily it was "all too easy to stigmatize the 'yellow vests'... and equate their movement with that of a few unacceptable acts."

Far-right leader Marine Le Pen voiced her full support for the protesters, telling the LCI channel the unrest revealed grievances held by "the immense majority of the French" who were being ignored by "a miniscule cast working only for itself."