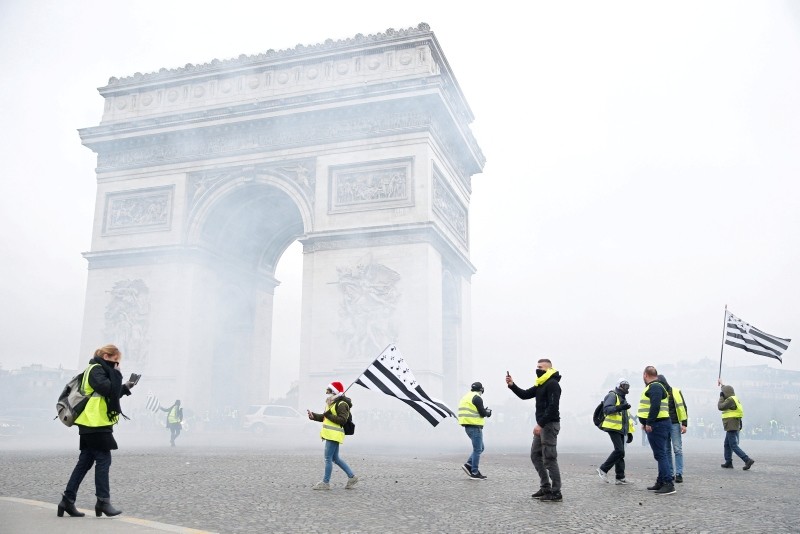 Tear gas floats in the air near the Arc de Triomphe as protesters wearing yellow vests, a symbol of a French drivers' gather to protest against higher diesel taxes, demonstrate in Paris, France, December 1, 2018. (REUTERS Photo)
by Compiled from Wire Services Dec 01, 2018 12:00 am

Police fired tear gas, stun grenades and water cannon in battles with "yellow vest" protesters around the Champs Elysees in Paris on Saturday, marking the third weekend of demonstrations across France against high living costs.

Police said at least 412 people had been arrested in Paris amid concerns that violent far-right and far-left groups were infiltrating the "yellow vests" movement, a spontaneous grassroots rebellion over the struggle of many in France to make ends meet.

At least 133 people have been injured, including 17 members of the security forces, in protests against high living costs in central Paris, the police department said.

France will consider imposing a state of emergency to prevent a recurrence of the demonstrations and urged peaceful protesters to come to the negotiating table, government spokesman Benjamin Griveaux said on Sunday.

"We have to think about the measures that can be taken so that these incidents don't happen again," Griveaux told Europe 1 radio.

When asked about imposing a state of emergency, Griveaux said it would be among the options considered on Sunday.

"It is out of the question that each weekend becomes a meeting or ritual for violence."

An assault rifle was stolen from a police vehicle, a source told AFP, though it was unclear if it was loaded.

For more than two weeks, the "gilets jaunes" (yellow vests) have blocked roads in protests across France, posing one of the largest and most sustained challenges Emmanuel Macron has faced in his 18-month-old presidency.

In Paris, masked and hooded protesters picked up and hurled crowd barriers and other projectiles in running battles with police around the world famous Champs Elysees boulevard.

"We are attached to dialogue, but also the respect for the law," Edouard Philippe told reporters. "I am shocked by the attacks on the symbols of France."

Several hundred yellow vests sat down around the Tomb of the Unknown Soldier under the Arc de Triomphe at the top of the avenue, singing La Marseillaise, France's national anthem, and chanting, "Macron Resign!"

On the facade of the towering 19th-century arch, protesters scrawled in big black letters: "The yellow vests will triumph."

After several hours of skirmishes in the morning, police had appeared to clear the area around the Arc, but rioters and peaceful protesters subsequently returned. Clashes in adjacent streets also broke out where barricades were put up, car windows were smashed and at least two vehicles set alight.

Along the Champs Elysees, peaceful demonstrators held up a slogan reading, "Macron, stop treating us like idiots!"

Macron said on Tuesday he understood the anger felt by voters outside France's big cities over the squeeze that fuel prices have put on households, but insisted he would not be bounced into changing policy by "thugs".

An estimated 75,000 demonstrators, most of them peaceful, were counted across the country in the afternoon, the interior ministry said. Police unions said there were 582 road blockages in France. Nantes airport in western France was briefly closed after protesters reached the tarmac.

A week ago thousands of protesters, who have no leader and have largely organised themselves online, converged on Paris for the first time, turning the Champs Elysees into a battle zone as they clashed with police firing tear gas and water cannon.

"What message do the yellow vests want to pass today? That we set France on fire, or find solutions? I find this (violence) absurd," Jacline Mouraud, a prominent activist within the yellow vests movement, told BFM television.

But a retired yellow-vest protester said: "The government is not listening. Revolution cannot happen without violence."

The outburst of anger is strongest on the outskirts of smaller provincial towns and villages, and underlines the gap between metropolitan elites and working class voters that has boosted anti-establishment politics across the Western world.

The immediate trigger for the protest wave was Macron's decision to raise tax on diesel fuel in a move to encourage the driving of less-polluting cars.

The yellow vests, who enjoy widespread public support, get their name from the high-visibility jackets all motorists in France must carry in their vehicles.

When they began, the protests caught Macron off-guard just as he was trying to counter a fall in his popularity rating to 30 percent. His unyielding response has exposed him to charges of being out of touch with ordinary people