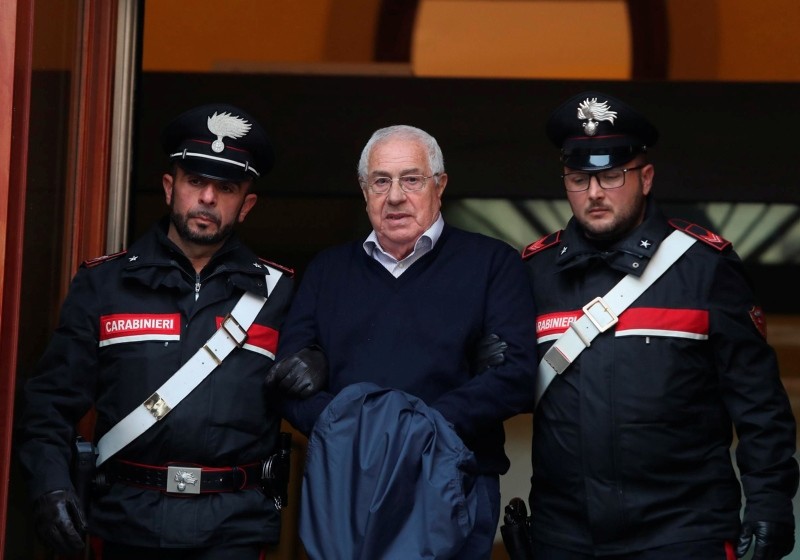 Settimo Mineo, who allegedly took over as the Palermo head of Cosa Nostra, is escorted by Italian Carabinieri police after an anti Mafia operation in Palermo, Italy, Dec. 4, 2018. (AP Photo)
by Associated Press
Dec 04, 2018 12:00 am
Italian authorities said Tuesday they had dismantled the rebuilt upper echelons of the Mafia in the Sicilian capital by arresting 46 people, including the man presumed to have taken over as provincial kingpin after the death of "boss of bosses" Salvatore "Toto" Riina.

Based on wiretaps, police determined that Settimo Mineo was elected head of a reconstructed "cupola," or provincial mob commission, during a May 29 meeting of clan leaders in Palermo. It was the first time clan leaders had gathered in such a forum for years, and followed Riina's November 2017 death, prosecutors said.

Italy's chief anti-Mafia prosecutor, Federico Cafiero de Raho, said the election of Mineo, 80, was significant because it showed that the center of power of Cosa Nostra had shifted to Palermo. Under Riina, its longtime base was Corleone, the Sicilian town made famous by writer Mario Puzo when he used Corleone as the main character's name in his 1969 novel "The Godfather."

Police recalled that the "provincial commission" structure was created in the 1950s as the decision-making forum for Sicilian and U.S. Mafia families. During the 1980s, it became less collegial under Riina's domination and effectively ceased to function after his 1993 arrest.

Prosecutors say Mineo effectively tried to resurrect the structure in the province of Palermo and return to the rules governing territory and communication that had previously dictated dealings among mob clans.

Palermo prosecutor Francesco Lo Voi said Mineo had already served a lengthy prison sentence for Mafia association and other crimes after he was swept up in the maxi-trials against the Sicilian Mafia in the 1980s and '90s. As the eldest of the local clan leaders, he enjoyed particular respect, he said.

"This is a sign that Cosa Nostra doesn't abandon its rules," Lo Voi told a press conference. "And that despite the convictions, despite the trials, important people can take over the most important roles once they're back in play."

Those arrested are suspected of mafia association, extortion, weapons violations and other charges, police said.

After Riina's 1993 arrest, the Sicilian Mafia saw a degree of marginalization compared with the Calabrian-based 'ndrangheta organized crime syndicate or the Neapolitan Camorra. But Italian officials said it nevertheless continued increasing its financial and business activities, and even started doing deals with the other southern syndicates.

"This is what emerges from the other investigations, that apparently facing this kind of situation, Palermo could not stay behind and not share with all the bosses what was to be the plan," Cafiero De Raho said.

Interior Minister Matteo Salvini called the sweep in Palermo an "extraordinary operation." Salvini said in a tweet that it had "dismantled the new 'cupola' of Cosa Nostra."