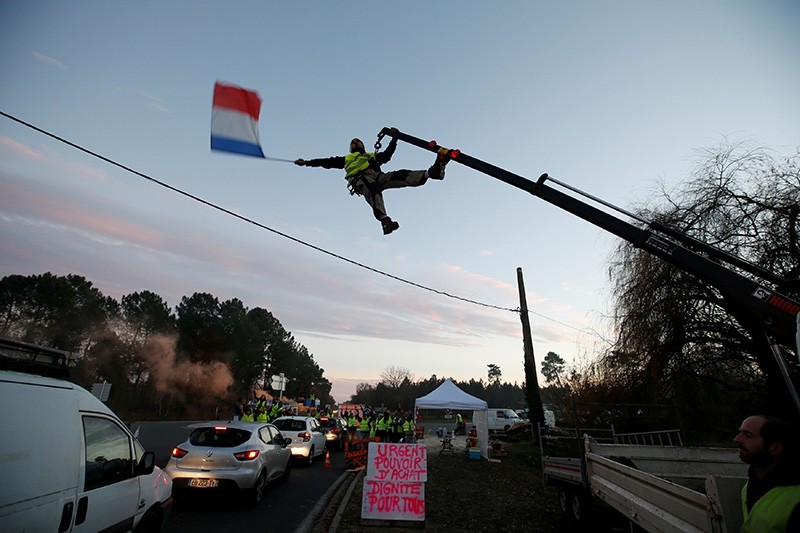 Trade unions and farmers pledged Wednesday to join nationwide protests against President Emmanuel Macron, as concessions by the government failed to stem the momentum of the most violent demonstrations France has seen in decades.

The "yellow vest" protests began over a plan to raise fuel taxes, but by the time Prime Minister Edouard Philippe bowed to three weeks of violence and suspended the plan Tuesday, the protesters were demanding much more.

A survey published Wednesday showed that most French people still back the "yellow vest" protests raging across the country and even more believe government concessions to the protesters are insufficient.

The Elabe poll found 78 percent believed the measures announced by Philippe in did not meet the expectations of the "yellow vests."

Tuesday's announcements, targeted at low-income families, include a six-month suspension on a rise in fuel taxes, a key issue driving the protests.

French police have cleared most of the fuel depots that protesters had blocked, but fuel shortages continued to hit several parts of France on Wednesday, with hundreds of gas stations affected.

Demonstrators were also blocking toll booths, letting drivers pass without paying, to press demands that ranged from income and pension rises to the dissolution of the National Assembly, France's parliament.

At Tolbiac University in downtown Paris, students took over a school building and classes were canceled.

And on Wednesday, France's largest farmers union said it will launch protests next week, after trucking unions called for a rolling strike.

Trade unions have not so far played a role in the improvised movement, but are now trying to capitalize on the growing public anger. A joint statement from the CGT and FO trucking unions called for action beginning Sunday night to protest a cut in overtime rates, and asked for an urgent meeting with the transportation minister.

Farmers union FNSEA said it would fight to help farmers earn a better income, though it said it would not officially be joining forces with the "yellow vests," as the protesters have come to be called after the high-visibility vests French motorists are required to keep in their cars, and which they don for demonstrations.

Some 72 percent support the movement overall, according to the poll -- numbers that have stayed stable despite violent clashes in Paris last weekend when some 200 cars were torched.

Largely made up of people in rural and small-town France who feel overlooked by former investment banker Macron, the movement has widespread support on the political fringes.

Among Macron voters, 52 percent back the movement.

The Elabe survey of 1,002 people was carried out online Tuesday and Wednesday for BFM television.