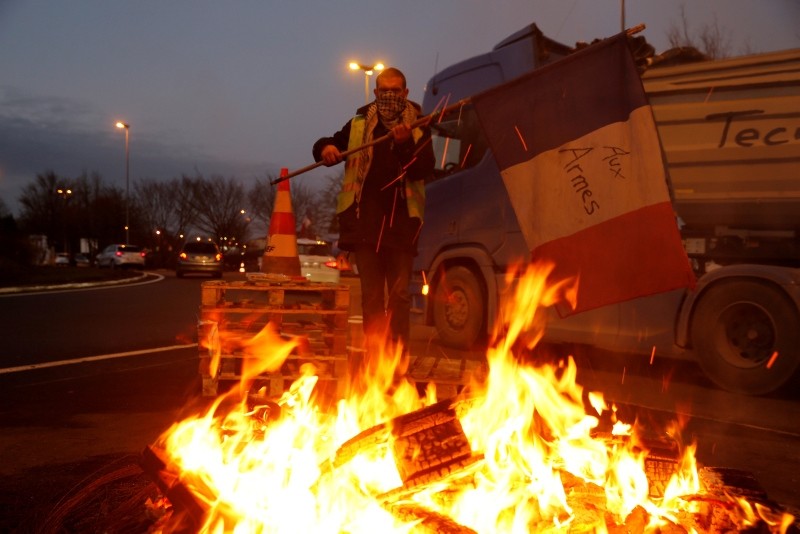 A protester wearing a yellow vest, the symbol of a French drivers' protest against higher diesel fuel prices, holds a flag with words ,To arms, near burning debris at the approach to the A2 Paris-Brussels Motorway, December 4, 2018. (Reuters Photo)
by Daily Sabah with AFP Dec 06, 2018 12:00 am

As the violent "yellow vests" protests continue across France, a major French ministry has warned of a possibility of a coup d'état and even forbid its staff from going to work this weekend, Le Figaro newspaper reported late Thursday.

"They are putschists. We are in a coup attempt," French officials were quoted as saying in the piece.

The report said protesters are also planning to attack officials, including bureaucrats and government officials.

Quoting French intelligence services, Le Figaro also said there are "calls to kill and be armed with guns to attack parliamentarians, the government, the officials of the executive and the police," adding that the secret services reported these threats to the presidency.

"If there are ten deaths this weekend, it is not sure that we can keep the Minister of the Interior," a source close to President Emmanuel Macron was quoted as saying in the article. Questions were also raised as to whether or not the prime minister would change, adding that "at best," things can change before the May 2019 European elections, and "in the worst case," "before Christmas."

The French government, under pressure from weeks of "yellow vest" protests over rising living costs, Wednesday scrapped all planned fuel tax hikes for 2019 and appealed for calm.

An increase scheduled for Jan. 1, was "scrapped for the year 2019" in its entirety, Environment Minister Francois de Rugy announced on BFM TV, in an about-turn for the government.

Protests erupted on Nov. 17 in opposition to rising fuel taxes, but have ballooned into a broad challenge to Macron's perceived pro-business agenda and complaints that he is out of touch with the struggles of ordinary people.

Four people have been killed and hundreds injured in accidents linked to the nationwide road blockades and protests, playing havoc with traffic in the busy run-up to Christmas.