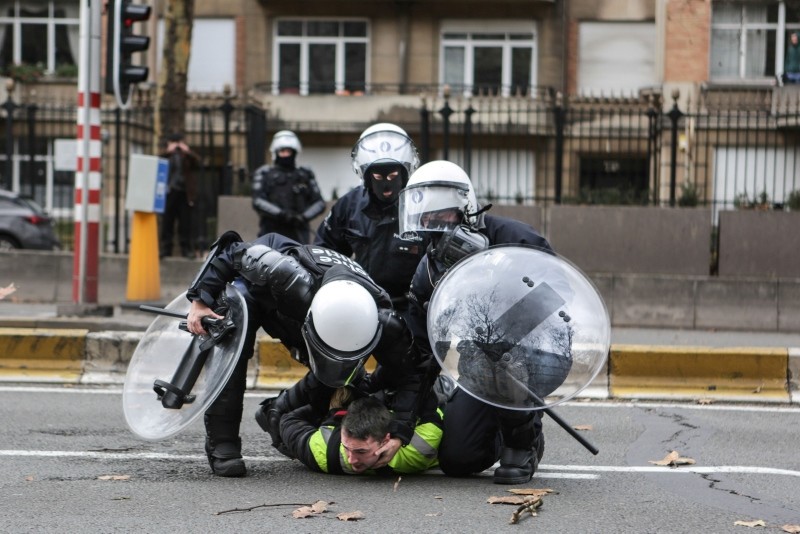 In the second violence of its kind in the capital in eight days, a crowd which police estimated at around 1,000 faced riot squads who used water cannon and tear gas to keep people away from the European Union headquarters and the nearby Belgian government quarter. Calm was restored after about five hours.

The movement in Belgium, inspired by the "gilets jaunes", or yellow vest, protests in neighbouring France over the past month, has given voice to complaints about the cost of living and demanded the removal of Belgium's centre-right coalition government, six months before a national election is due in May.

"A policeman was injured in the face. He was taken to hospital but his life is not in danger," Brussels police spokeswoman Ilse Van De Keere told AFP, adding that the protesters had hurled projectiles and paving stones.

"There has been a certain amount of damage," she said, adding that the situation was now back to normal.

About a thousand people took part in the rally and the police had to resort to teargas and water cannon to break up the demo, she said.

The area housing European institutions including the offices of the European Commission and the European Parliament was sealed off as a precautionary measure.

According to Belga news agency, young protesters blocked a highway linking Brussels to the town of Rekkem in Flanders, near the French border.

They also put up a barricade by the Franco-Belgian border close to Adinkerque, Belga said.

It has spilled over to some other countries, including Belgium and especially in the country's French-speaking region.

On November 30, a "yellow vest" protest by some 300 people in Brussels degenerated into violence in which two police vehicles were torched.