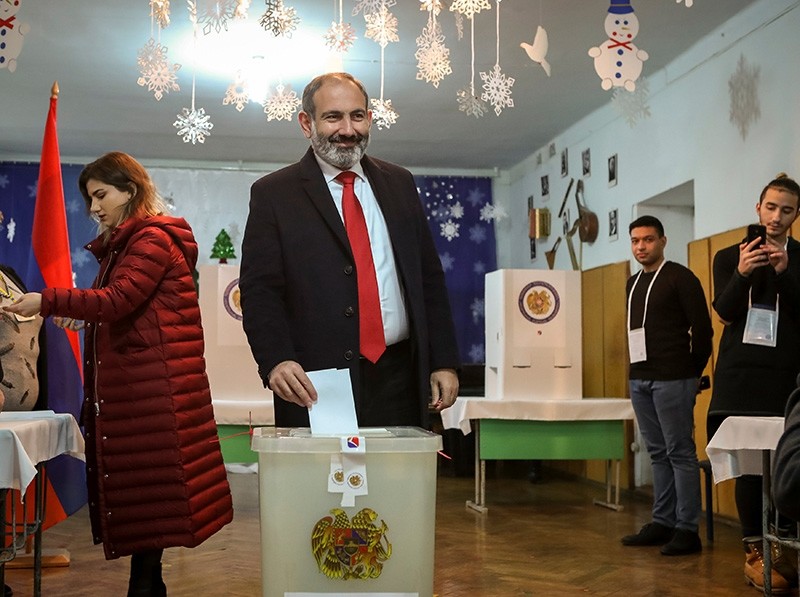 The electoral bloc of Armenia's acting prime minister Nikol Pashinian won a landslide victory in Sunday's snap parliamentary elections, which were triggered by the reformist leader seeking to cement his political authority in the post-Soviet country.

The bloc led by Pashinian's Civil Contract party had 70.45 percent of the vote, and trailing in distant second place with 8.37 percent was the Prosperous Armenia party, according to results from 90 percent of precincts, the central election commission said.

A small liberal pro-Western party, Bright Armenia, also cleared an electoral threshold with 6.33 percent of the votes, the commission said.

The 43-year-old former journalist has pledged to root out endemic corruption and address widespread poverty, earning him supporters in the impoverished landlocked nation of about three million people.

"After the elections, we will be developing Armenian democracy and make an economic revolution happen," Pashinian told reporters after casting his ballot.

Pashinian's reform drive had been stalled for months by opposition from Sarkisian's then-ruling Republican Party, which dominated the National Assembly until his calculated resignation triggered parliament's dissolution last month.

The Republican Party took 4.56 percent in Sunday's elections, failing to clear the five-percent threshold to make it into parliament.

At a polling station in central Yerevan voters expressed optimism about the political change promised by Pashinian and vented their anger at former corrupt officials.

"Thanks to the revolution, we will finally have fair elections," 72-year-old pensioner Parzik Avetisyan told AFP.

"I voted for the positive change promised by Nikol (Pashinian)," he added.

Another voter, 52-year-old painter Garnik Arakelyan, said: "I want all those corrupt officials who for many years were robbing and humiliating people to be jailed."

Parliamentary polls had not been scheduled to be held until 2022.

Analysts say Pashinian sought new elections while he is at the peak of his popularity.

In September, his bloc scored a landslide victory in municipal elections, winning more than 80 percent of the vote in the capital Yerevan, where nearly 40 percent of the former Soviet Republic's population lives.

"The elections were called on the wave of a revolutionary euphoria," analyst Gevorg Poghosyan told AFP.

"But after the polls, that sentiment will inevitably weaken and Pashinian and his team will face a reality check."

On foreign policy, Pashinian has said Armenia will "further strengthen (our) strategic alliance with Russia and, at the same time, step up cooperation with the United States and European Union".

Nine political parties and two electoral blocs were competing for mandates in the 101-seat National Assembly.

A party needs at least five percent of the vote to be elected to parliament, while an electoral bloc must clear a seven-percent barrier.

But -- regardless of how many votes they win -- opposition parties will take at least 30 percent of parliamentary seats, according to Armenia's electoral law.

More than 2.6 million people were eligible to vote in the election monitored by international observers from the Organisation for Security and Cooperation in Europe.