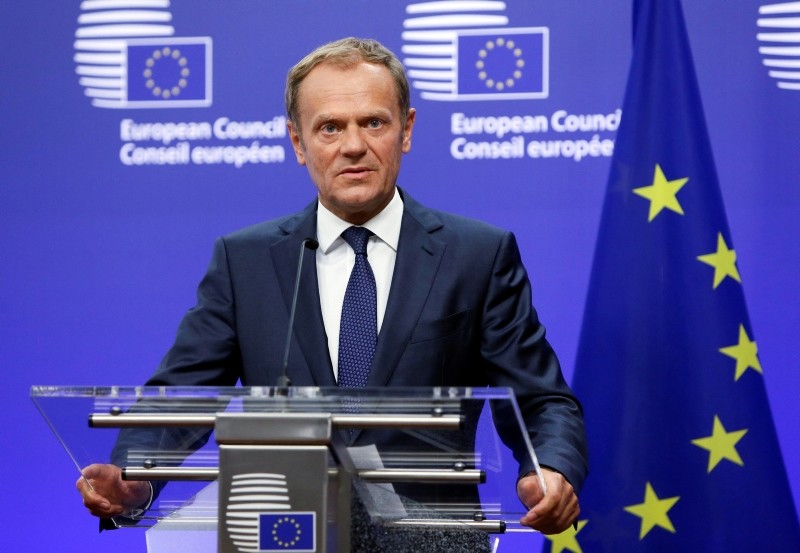 EU leaders will not renegotiate Britain's Brexit deal, including the Irish border "backstop", their chairman Donald Tusk said on Monday after Prime Minister Theresa May put off a parliamentary vote on a package that was facing heavy defeat.

EU officials said European Council President Tusk could meet May as early as Tuesday to prepare talks on Brexit during a regular Brussels summit which May will attend on Thursday and Friday. Tusk said he had scheduled a meeting of the other 27 leaders on Brexit, to be held at some point during the summit.

"We will not renegotiate the deal, including the backstop," he said on Twitter after May said she would go back to European neighbors to seek new reassurances about the insurance clause which would bind Britain into a customs union with the EU in order to avoid a "hard" EU border for troubled Northern Ireland.

May's domestic critics want a time limit on the backstop, but Dublin and its EU allies insist that it must be able to be used until some better way is found to avoid customs checks on the EU-UK land border while letting Britain escape EU rules.

EU officials said it was almost inconceivable that leaders would agree to reopen the withdrawal treaty they agreed with May two weeks ago, which includes the backstop. They might agree to tweak the accompanying, non-binding political declaration on future relations, though even that was doubtful. Finally, they could issue a new declaration of intent to try and help May.

Tusk said only: "We are ready to discuss how to facilitate UK ratification."

But he also warned that the EU would forge ahead with preparing for there being no deal at all as it faces a Britain that seems incapable of forging a majority opinion on what kind of Brexit it wants - or even if it wants to leave at all.

"As time is running out, we will also discuss our preparedness for a no-deal scenario," Tusk said, referring to the fact that Britain will be out of the bloc on March 29, according to a treaty timetable, with or without a deal.