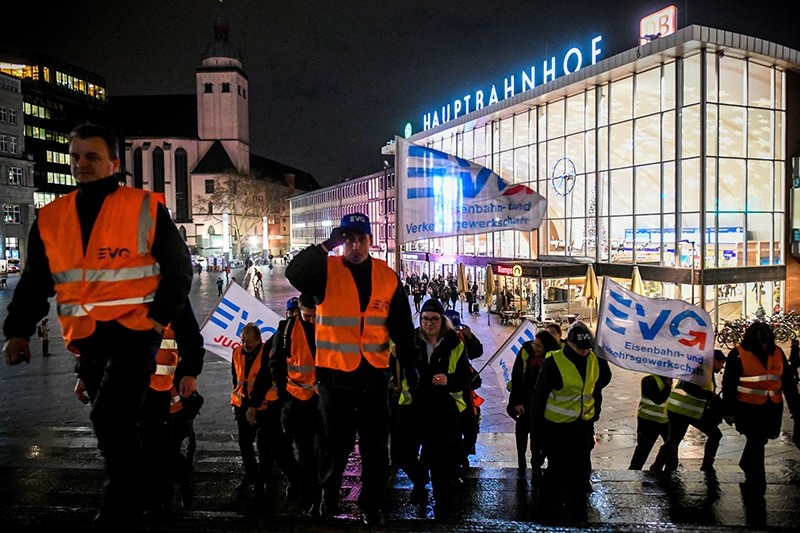 Striking members of the German Railway and Transport Union (EVG) gather in front of the Cologne central train station as they protest during a warning strike in railway operations in Germany, in Cologne, Germany, Dec. 10, 2018. (EPA Photo)
by Daily Sabah with Agencies Dec 10, 2018 12:00 am

Following widespread popular discontent that is infuriating many of the protesters across Europe over the weekend, rail workers in Germany staged a four-hour strike over pay yesterday morning, bringing long-distance rail traffic to a standstill and disrupting commuter and freight trains.

Germany's Deutsche Bahn rail company said that regional train traffic, too, was significantly affected across Germany, with only a few commuter trains operating in the cities of Berlin, Munich and Frankfurt.

The strike comes after the union, which represents around 160,000 workers, walked away from salary negotiations with the rail company on Saturday saying the new pay scale offered was too low. Pay negotiations between Deutsche Bahn and the EVG rail workers' union, demanding a 7.5-percent salary rise for 160,000 employees, ended without an agreement. A warning from EVG, which represents most railway industry workers and professionals, that strike action is inevitable has raised fears that Christmas travel could be disrupted. With further strikes threatened, it is expected that thousands of members of the Union of German Locomotive Drivers (GDL) can take action if wage negotiations talks fail.

As Germany was hit by rail strikes Monday, many German workers have had an affinity for the "yellow vest" protests started in France, according to reports from Germany's Socialist Equality Party (SGP). The yellow vest protests, named after the high-visibility safety bibs that have become their symbol and uniform, triggered similar actions in Europe. Belgian protesters wearing the fluorescent yellow vests carried by all motorists for emergencies briefly blocked a motorway near Belgium's border with France. The movement in Belgium, inspired by the "gilets jaunes" or yellow vest, protests in neighboring France over the past month, has given voice to complaints about the cost of living and demanded the removal of Belgium's center-right coalition government, six months before a national election is due in May.

For the last four weeks, thousands of protesters, wearing yellow vests, have been gathering in major French cities including Paris to protest President Emmanuel Macron's controversial fuel tax hikes since Nov. 17. France's yellow vest protesters have political stances ranging from the far right to the far left but the leaderless group is united in its sense that Macron and his government are out of touch. According to a recent survey, 84 percent of the French people, mostly from the middle-income group, support the protests. Protesters turning out across France on Saturday highlighted demands ranging from better support for pensioners to the downfall of capitalism.

Security officials imposed a lockdown on parts of central Paris, determined to prevent a repeat of the rioting a week ago that damaged a major monument, injured 130 people and tarnished the country's global image. Associated Press reporters witnessed multiple protesters hurt in Saturday's clashes with police. Paris police said 30 people were injured, including three police officers. An AP video journalist was wounded in the leg as police fired tear gas and rubber bullets on the Champs-Elysees.

"We have never supported vandalism. When we witnessed vandalism in our country, we saw these [European] countries strongly supporting it through NGOs, politicians and the press. Turkey remained on the agenda every day. Today, there are demonstrations in France, we occasionally see them going extreme. We are against vandalism, but the excessive force used by French police is truly a lesson. The attitude of the European Union and countries is also a lesson. The press attitude in this context is a total disaster. That's what we call 'double standards." That's what we call hypocrisy," he said, according to Anadolu Agency.

Çavuşoğlu pointed out that the other European countries didn't raise much criticism to the police violence as they viewed France as an EU member with whom they felt they must be in solidarity with. He added that France should be criticized for enforcing policies violating the standards and values of the European Union.