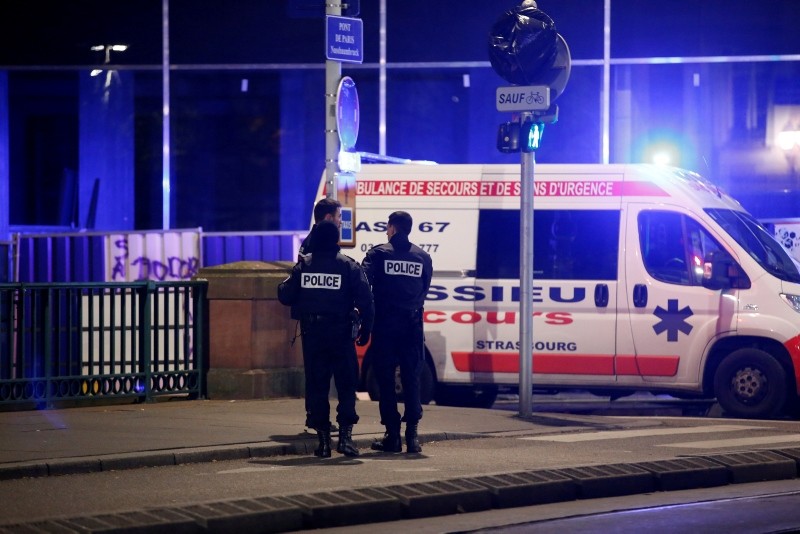 Three people have been killed and 12 wounded in a shooting on Tuesday in the French city of Strasbourg, two French police union officials said, updating the number of victims. According to the security forces, the suspect was wounded, but is still at large.

Authorities did not give a motive for the shooting, though prosecutors said they had opened a terrorism investigation. Strasbourg, on France's eastern border, is home to the European Parliament, one of several places that was locked down after the shooting.

Authorities said they had identified a suspect. The prefect of the Strasbourg region said the man was on a watch list of people who had potentially been radicalized.

Interior Minister Christophe Castaner, who traveled to Strasbourg, said the suspect, not named, had been convicted in both France and Germany for crimes unrelated to terrorism and served time. He did not elaborate.

Hours before the shooting, French gendarmes went to the suspect's home to arrest him, but he wasn't there, Stephane Morisse of police union FGP said. They found explosive materials during a search, he said.

Some 350 security forces and two helicopters were searching for the assailant, who had been radicalized for "several years" and confronted law enforcement officers twice, exchanging fire, while he "sowed terror," Castaner said.

More than seven hours after the bloodshed, the regional prefect said that 11 other people had been injured, five seriously, downgrading the minister's earlier count of 12 injured.

The shooter was also shot and wounded by soldiers guarding the Christmas market, according to Stephane Morisse of police union FGP.

French military spokesman Col. Patrik Steiger said the shooter didn't seem to be aiming at soldiers patrolling in and around the market, but appeared to target civilians instead.

Witnesses described hearing gunshots, screams and shouts of police officers ordering people to stay indoors before the area fell silent and the officers fanned out.

"A serious public safety incident is taking place in Strasbourg," the ministry wrote on Twitter. "Residents are asked to stay home. More information to follow, follow the instructions of authoriti President Emmanuel Macron adjourned a meeting at the presidential palace Tuesday night to monitor the emergency, his office said, and at midnight presided over a meeting at the Interior Ministry's crisis center.

The Paris prosecutor, in charge of anti-terror probes in France, was also in Strasbourg. The prosecutor's office said the investigation was being conducted on suspicion of murder and attempted murder in relation with a terrorist enterprise charges, suggesting officials do not exclude links between the shooter and an extremist cell.

Authorities had urged the public to remain indoors at the height of the drama, and people out dining were kept in restaurants for hours, along with lawmakers at the European Parliament, and thousands at a sports stadium. They eventually were allowed to leave, with those with nowhere to go housed at a gymnasium, the prefect tweeted.

The market was closed Wednesday and festivities cancelled in a sign of mourning, Mayor Roland Ries said. Flags in Strasbourg were ordered at half-staff.es."

Turkey has condemned the attack with a statement by Foreign Ministry.

"We extend condolences to the French People and Government and to the families of those who lost their lives in this heinous attack and wish speedy recovery to those wounded," the ministry said on Wednesday.

The situation in France has been tense lately, with yellow vests protests spreading across the country and beyond.

The interior ministry said 136,000 people had taken part nationwide in last Saturday's protests, which turned violent in several other cities including Marseille and Toulouse.

In Paris, around 10,000 "yellow vests" flocked to the Champs-Elysees and other areas — 2,000 more than joined the action last week — as many headed in from other provinces for the first time.

Nationwide, more than 1,700 people were detained, over 1,000 of them in Paris, as police vowed "zero tolerance" for anarchists, far-right supporters and others seeking to cause trouble.