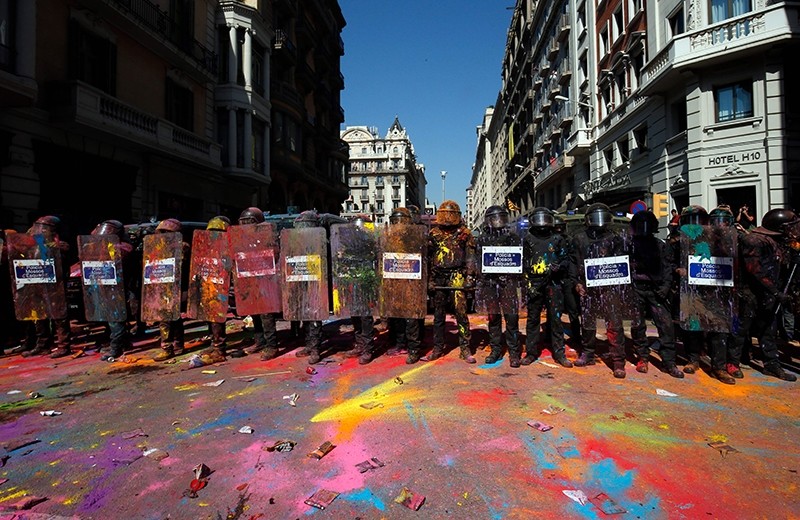 Sept. 29, 2018 file photo shows Catalan regional police officers, covered in paint, standing guard after clashing with separatist protesters during a counter-protest against a demonstration in support of Spanish police in Barcelona. (AFP Photo)
by Daily Sabah with Agencies Dec 11, 2018 12:00 am

Spain's interior minister said Tuesday in a radio program that the government will send state police to Catalonia if local authorities fail to stop pro-independence protests, such as the one that shut down major highways over the weekend.

Interior Minister Fernando Grande-Marlaska warned that if the regional police force does not exercise "the roles... assigned to it," then "we will order state security forces to intervene, if necessary and with proportionality."

Grande-Marlaska issued the warning in a letter to his counterpart in Catalonia's separatist government late on Monday.

The letter cites a protest on Saturday by radical Catalan separatists who blocked the AP-7 toll highway for 15 hours without any intervention by Catalan regional police, the Mossos d'Esquadra. The highway runs along Catalonia's Mediterranean coast to France. The protesters also lifted toll barriers along the highway on Sunday.

"It is not normal, in a modern and civilized country, that highways are cut for 15 hours because hundreds of people want to protest," Spanish Foreign Minister Josep Borrell said on Monday in Brussels.

Catalan officials have yet to make a statement regarding the issue.

Catalan Premier Quim Torra has previously failed to condemn the protests, instead targeting regional police for restraining the protesters. He even said on Saturday that "the Slovenian way" should be a model towards the Catalan independence, referring to a 10 day-long protests that left dozens of casualties in Slovenia.

The involvement of the national police would be a contentious issue in the northeastern region which has its own administration and where polls suggest almost half the population wants to split away from Spain.

Catalonia is one of only three regions of Spain, along with the northern Basque Country and Navarra, which have their own regional police force. In the rest of the country law and order is maintained by Spain's National Police and Guardia Civil forces. It would also stir memories of Madrid's decision to send in a large contingent of national police in September last year after the Catalan government called an illegal independence referendum.

Spain's Supreme Court last October ordered 18 former Catalan separatist leaders to stand trial over the independence declaration. Prosecutors are seeking jail terms of up to 25 years on charges of rebellion or misuse of public funds over the failed secession bid. The sensitive trial is expected to start in early 2019.

Spain's new Prime Minister Pedro Sanchez, who came to power in June, has said he is open to a referendum on greater autonomy and has promised to lay out detailed plans in parliament.

But Grande-Marlaska said the local authorities had to show they could keep order and prevent a repeat of Saturday's protests. "It was observed that there was no intervention (by the regional police)... a reality that is difficult to deny," he said in a radio interview Tuesday morning.