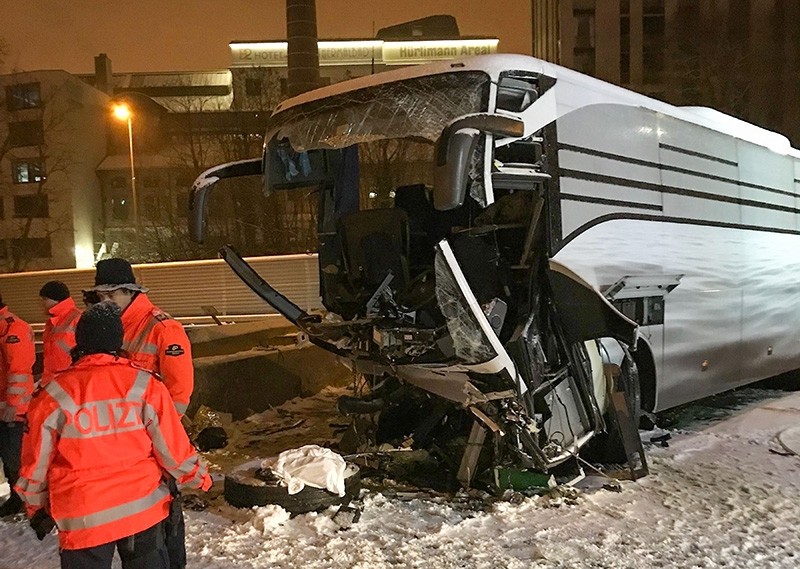 This handout picture released by Swiss police of the Canton of Zurich (Kantonspolizei Zurich) shows the wreckage of a bus that crashed into a wall early on December 16, 2018 on motorway A3 near Zurich, killing 1 and injuring 44. (AFP Photo)
by Dec 16, 2018 12:00 am

An Italian woman was killed and 44 other people were injured early Sunday when their long-distance bus swerved and hit a wall on an icy motorway near Zurich, police said.

Three people were severely injured, and one of the Italian drivers is in critical condition, police spokeswoman Rebecca Tilen said.

The bus was en route from the Italian city of Genoa to Dusseldorf in Germany.

"At the time of the accident, the motorway was covered with snow and ice, and it was snowing," Tilen told dpa, adding that investigators still have to determine the exact cause of the accident.

The bus was operated by a subcontractor of Flixbus, a German company that offers intercity services. The vehicle had Italian license plates.

"We extend our sympathies to the affected passengers and bus drivers as well as their families and friends," Flixbus said in a statement.

"The safety of passengers and drivers is a top priority for Flixbus," the company added.

There were 50 people on board in total, including the 37-year-old Italian woman and 16 of her compatriots.

The passengers also included several travelers each from Russia, Germany, Nigeria, Colombia and Albania, as well as individuals from Benin, Bosnia-Herzegovina, Ghana, Jordan, Romania and Switzerland.