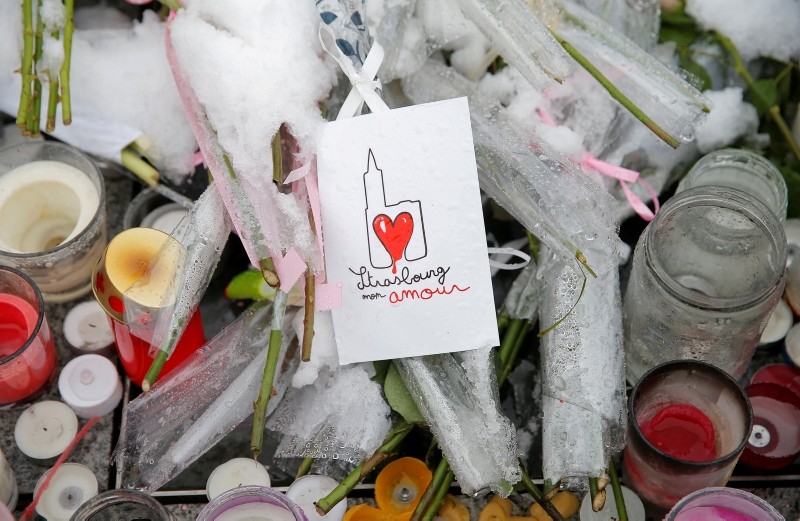 A drawing representing Strasbourg's cathedral is seen at an improvised memorial in tribute to the victims the shooting in Strasbourg, France, December 16, 2018. The sign reads ,Strasbourg my love,. (REUTERS Photo)
by Compiled from Wire Services Dec 16, 2018 12:00 am

The Paris prosecutor's office said on Sunday that a fifth person had died from their wounds following Tuesday's Strasbourg Christmas market shooting.

An official with the prosecutor's office said the victim was a Polish national and gave no other details.

"My brother Barto Pedro Orent-Niedzielski has just passed away. He thanks you for the love and strength you have given him," the brother of the 36-year-old victim from the Polish city of Katowice wrote on Facebook.

The gunman, Cherif Chekatt, was killed on Thursday night after firing on police, ending a two-day manhunt that involved more than 700 members of the security forces.

The 29-year-old attacked Christmas market shoppers armed with a gun and a knife on Dec. 11.

Orent-Niedzielski and his Italian friend Antonio Megalizzi had tried to stop Chekatt from entering a bar during Tuesday's assault, a close friend told AFP.

Megalizzi, 28, died from his injuries on Friday.

Nicknamed "Bartek", Orent-Niedzielski had lived in Strasbourg for 20 years, according to his friend.

11 people were also injured in the bloodbath, with several still in a critical condition.