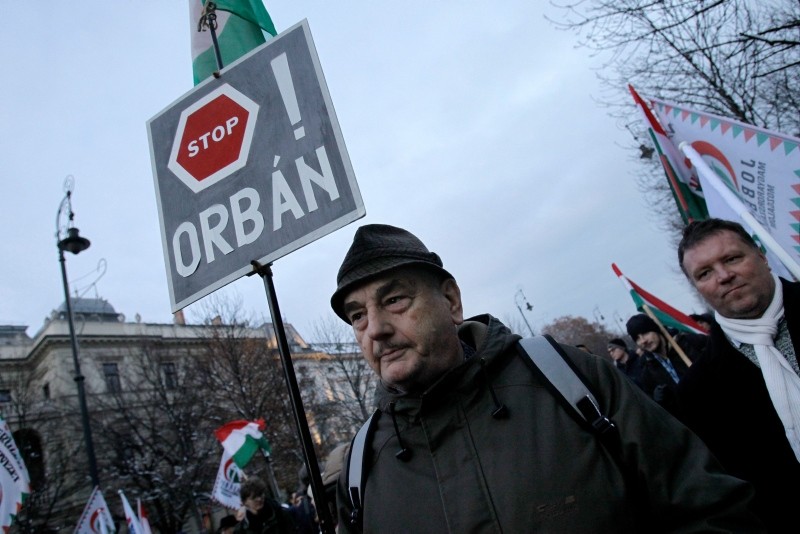 A protester holds a sign reading ,Stop Orban, as members and sympathisers of several trade unions, political parties and civil organisations march in Budapest on December 16, 2018. (AFP Photo)
by reuters
Dec 16, 2018 12:00 am

Around 10,000 Hungarians protested in Budapest on Sunday against a new labor law and what they see as the increasingly authoritarian rule of right-wing nationalist Prime Minister Viktor Orban.

Protesters waved Hungarian and European Union flags as they walked from the historic Heroes' Square towards parliament in crispy winter cold, holding up banners with slogans including "Don't steal" and "Independent courts!". The crowd swelled to around 10,000 by the time they reached parliament.

"Discontent is growing," said Andi, 26, a sociology student who did not want to give her full name. "They have passed two laws this week which ... won't serve Hungarian people's interest."

The new labor law allows employers to ask for up to 400 hours of overtime work per year, leading critics to label it the "slave law".

The government also passed a law to set up new administrative courts that will answer to the government and oversee sensitive issues such as electoral law, protests and corruption issues.

"This government ignores us, workers," Tamas Szekely, deputy head of the Hungarian Trade Unions' Association said in a speech. "We must raise our voice and give an answer."

Orban has often clashed with Brussels as he has built a system that his critics see as autocratic, boosting his control over the courts and the media.

Civil rights watchdogs said the new courts law was the latest erosion of democratic institutions under Orban, who rose to power in 2010.

He has since tweaked the election system to favor his ruling Fidesz party and has put loyalists at the head of public institutions, while his allies have enriched themselves.

He has rarely angered large voter groups at home. Earlier this week police used tear gas on protesters at parliament.

Orban was reelected in April on the back of a fiercely anti-immigration campaign, facing a weak and fragmented opposition.

Fidesz said on Saturday, in reaction to the protests, that it was "increasingly obvious that criminals have been part of the street riots organized by the Soros-network."