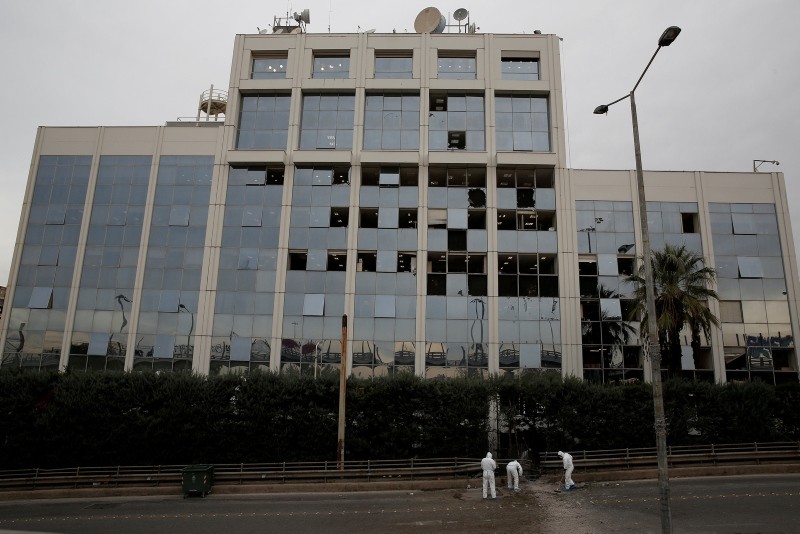 Forensic experts search for evidence after a bomb blast outside the Greece's SKAI TV building in Athens, Greece December 17, 2018. (Reuters Photo)
by Associated Press Dec 17, 2018 12:00 am

Police said the blast occurred at 2:35 a.m. outside the broadcaster's headquarters in a coastal area near Athens after telephoned warnings to a news website and another TV station prompted authorities to evacuate the building.

There was no immediate claim of responsibility. Armed far-left and anarchist organizations have attacked news media outlets in the past.

"This was a strike against democracy. Thankfully, there was only material damage — it's a relief that no one was hurt — following the swift action taken by the police," Public Order Minister Olga Gerovasili said.

"We will reinforce our democracy. This incident should give pause to those who leave a path open to terrorism and fascism."

She said the anti-terrorism police were leading the investigation. Dozens of police investigators wearing white coveralls collected evidence from the scene, much of which remained cordoned off.

The blast shattered windows and damaged the front of the building, and tore through front offices. Nearby apartment buildings and cars were also damaged.

The explosive device was attached to a metal crash barrier on a busy coastal road in the Faliro area south of Athens.

Journalist Nikos Filippidis arrived for work after the building was partially reopened.

"There are people who work here for the press, to inform the public," he said. "The damage will be fixed, but this feels like violence inside someone's home."

Monday's attack bore some similarities with a Dec. 22, 2017, bombing of a courthouse building in central Athens. That attack was claimed by a far-left group called Popular Fighters Group.

Greece has a history of armed attacks over the last four decades, mostly from radical far-left groups that began to emerge after a seven-year dictatorship that collapsed in 1974.

Targets frequently include banks and embassies, as well as police and judicial sites.