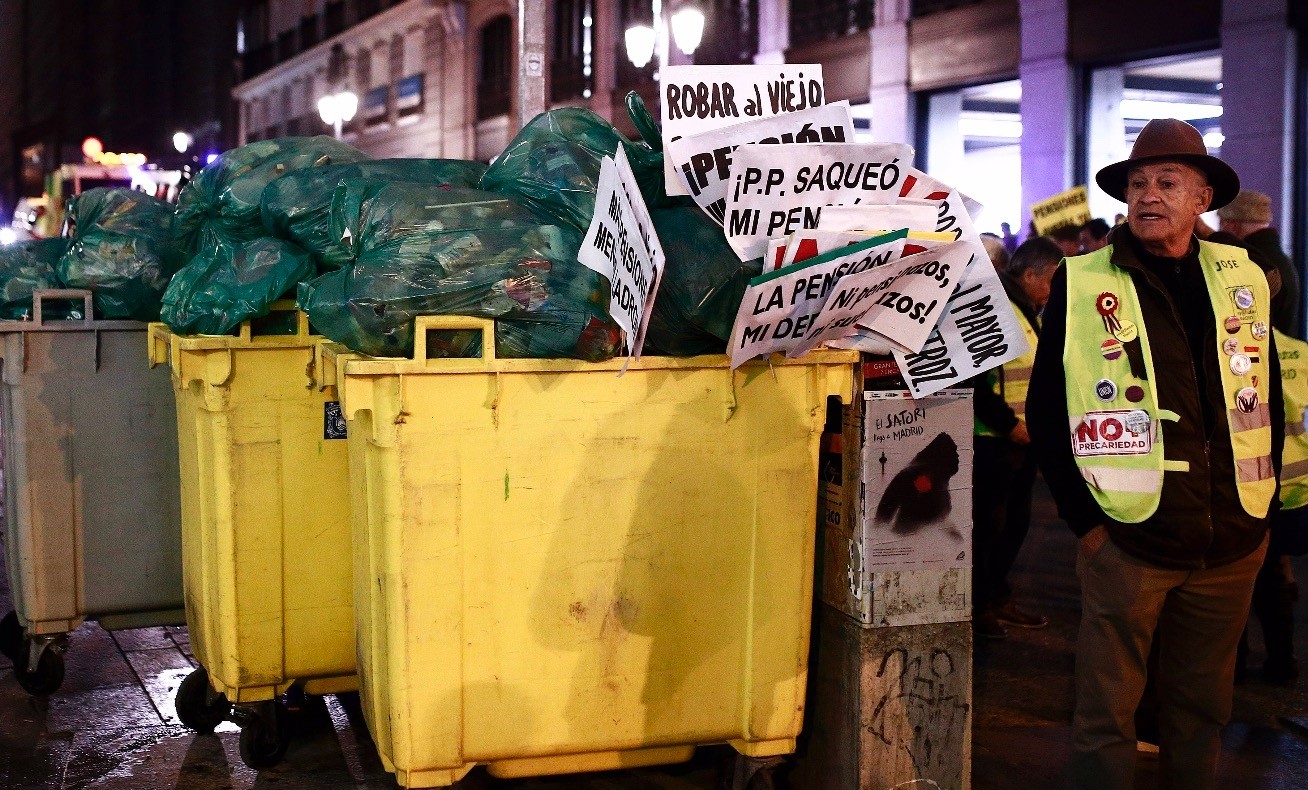 A protester wearing a yellow vest stands next to a trash container filled with placards used during a demonstration, Madrid, Dec. 15.
by Compiled from Wire Services Dec 17, 2018 12:00 am

The 'yellow vest' revolt in France over the high cost of living has sparked copycat protests worldwide, having spread from Europe to other continents

The month-long French "yellow vest" demonstrations, which have led to repeated rioting in Paris, have inspired protesters worldwide. Over the weekend, yellow vest protests spread to Canada and Spain, and protesters wearing yellow vests took the streets in various cities across the two countries on Saturday.

The protesters held rallies in eight cities in Canada; Edmonton, Toronto, Winnipeg, Okanagan, Moncton, Calgary, Saskatoon, and Halifax to protest the government's policies and the U.N. migration pact. Gathering outside Halifax's City Hall, dozens of people blasted Prime Minister Justin Trudeau's policies and the government's recently-signed the United Nations' Global Compact for Migration, which promotes safe and legal migration. Some 60 protesters gathering at Nathan Philips Square at Toronto City Hall also blasted a lack of freedom of speech in the country as well as the U.N. migration pact.

On the same day in Spain, protesters, inspired by the rallies that have been taking place in France, marched in Madrid during a demonstration by yellow vest movement calling for better pensions on Saturday.On Friday, several hundred yellow vest protesters demonstrated on the streets of Israel's commercial hub Tel Aviv against the high cost of living, mirroring the yellow vest movement. Videos on social media showed people in fluorescent-yellow safety vests holding Israeli flags, megaphones and signs on a central street in the coastal city.

Apart from Europe, in South Africa, where some protesters was spotted wearing yellow vests during demonstrations against the low quality of public services, the Federation of Trade Unions (SAFTU) spoke out in favor of the French movement, saying it was a model for future protests.

For the last five weeks, thousands of protesters wearing yellow vests have been gathering in major French cities including Paris to protest President Emmanuel Macron's controversial fuel tax hikes since Nov. 17. France's yellow vest protesters have political stances ranging from the far right to the far left but the leaderless group is united in its sense that Macron and his government are out of touch. According to a recent survey, 84 percent of the French people, mostly from the middle-income group, support the protests. Protesters turning out across France on Saturday highlighted demands ranging from better support for pensioners to the downfall of capitalism.

A month of yellow vest protests have taken a further toll on the popularity of French President Emmanuel Macron, a new poll showed yesterday. Around 66,000 protesters turned out again on Saturday on the fifth round of anti-government demonstrations, which sprung up over diesel taxes last month. The figure was about half the number of the previous weekend, suggesting momentum was waning and the most acute political crisis of Macron's 19-month presidency was coming to an end.

In a bid to end the standoff, a visibly contrite Macron announced a package of measures on Monday in a televised address, estimated by economists to cost up to 15 billion euros ($17 billion). The 40-year-old former investment banker acknowledged widespread animosity toward him and came close to apologizing for a series of verbal gaffes seen as dismissive of the poor or jobless.

A major poll by the Ifop group published in the Journal du Dimanche newspaper showed Macron's approval had slipped another two points in the last month, to 23 percent. The proportion of people who declared themselves "very dissatisfied" by his leadership jumped by six points to 45 percent.