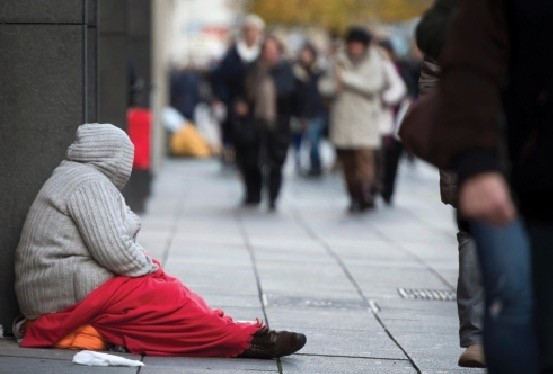 The winter chill in Germany has left at least nine homeless people since October.
by Daily Sabah with Reuters Dec 26, 2018 12:00 am

As Germany suffers from rising poverty rates, sleeping out in cold temperatures claimed the lives of at least nine homeless people. The number of homeless people in the country may have exceed 1 million for the first time this year

The number of people who died while homeless across Germany has increased this year with at least nine people reported dead due to sleeping out in the cold, according to a German association for homeless people.

Four of these deaths were in Hamburg, two in Düsseldorf, while the others were in Cologne, Essen and Lauchhammer. Last year, three homeless people lost their lives in extreme cold, during the same period, the Federal Association for the Support of the Homeless (BAGW) reported.

"We know of nine people who died at night for no fault of their own," Werena Rosenke, the association's managing director told the newspaper Rheinische Post, as reported by Deustche Welle. "In some cases forensic medical examinations are still ongoing, but we assume that the victims had no dwelling and froze to death due to low temperatures."

BAGW notes that the number of homeless people in Germany may have exceeded one million for the first time.

"The total number could already have risen to one million by now," Rosenke said. "Last year our forecast was that soon 1.2 million men, women and children could be without a home of their own."

Germany is known as the European Union's locomotive with its robust economy, record-breaking foreign trade. However, it is also emphasized that in no country the wealth is as unevenly distributed as it is in Germany.

Despite economic growth, the country has seen unprecedented poverty rate. Almost 20 percent of Germany's population, or 16 million people, were at risk of poverty in 2016, the Federal Statistics Office reported last year.

Based on the estimates by BAGW in 2017, about 860,000 people were recorded as homeless. About 52,000 of them live in the streets without a roof over their heads while the others spend nights in emergency shelters or stay with friends.

The increasing number of those living in shelters is driven higher by rising rents, decreasing availability of subsidized housing, and the growing numbers of refugees granted asylum status and therefore entitled to housing, according to the homelessness association. "The main cause of housing shortages and homelessness is a housing policy that has failed in Germany for decades, as well as insufficient efforts to fight poverty," Thomas Specht, director of the association, said in a statement last year, as reported by Reuters.

In Germany, the measures taken for homeless people left in cold weather are insufficient. BAGW, based the records of the cold-related deaths, criticizes the government's lack of statistics on the cold deaths records and the number of homeless people. According to the data of the union in the country, about 300 people have frozen to death since 1991. However, the records are vague due to difficulties in counting deaths, with those registering deaths often either unaware that someone was homeless or unable to record the address of any emergency accommodation.