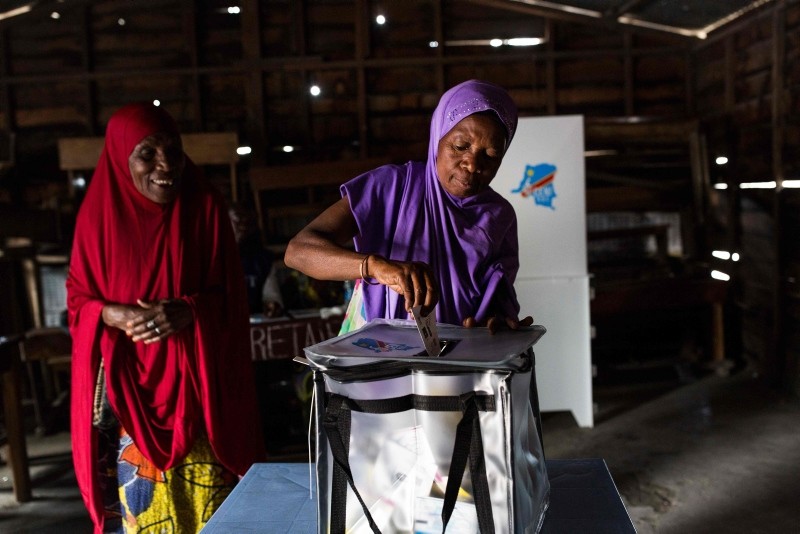 Congo's election officials began counting ballots Sunday evening, although many polling stations stayed open into the night to make up for lengthy delays in voting.

Numerous problems — including torrential rain in the capital, long delays at some polling stations, broken-down machines and an instance of deadly violence — hampered voting across the country, marring the presidential election the country hoped would be its first peaceful, democratic transfer of power since independence in 1960.

The officer and official were killed along with two civilians during clashes at a polling station in the Walungu area, campaign director Vital Kamerhe told AFP.

He said the violence broke out after the electoral official was accused of trying to rig the vote in favor of Emmanuel Ramazini Shadary, the candidate championed by President Joseph Kabila in power for 17 years.

"An agitated crowd started fighting with police. An officer was killed, which we deeply regret," said Kamerhe, a former president of the National Assembly who is from South-Kivu.

The mob "then attacked the electoral official who died. Two civilians were also killed."

South-Kivu authorities said an investigation had been opened into the incident.

Catholic Church election observers (Cenco) did not mention the deaths in their third and final report on Sunday's vote at 2000 GMT.

The 40,000 grassroots observers, set up by the influential Catholic Church, said it had received 1,543 reports of incidents of voting irregularities by early afternoon.

Of these, 544 involved "malfunctions with voting machines," it said.

In some places, long queues built up because of a lack of electoral roll or because voters could not find their names on the lists, AFP reporters found.

At Imara in Lubumbashi, 30-year-old voter Diane Mumba, said, "The (voting) machines have been breaking down again and again for the last two hours. I don't know when I am going to vote."

An election observer in Lubumbashi confirmed that "there are five or six polling stations where the machines aren't working. You have to wait for a technician."

In Kinshasa, an elderly lady said she had trouble with the touch-screen voting.

"It's very complicated. I pressed the button without really knowing who I voted for -- I didn't see my candidate's number or face," she complained.

In the eastern city of Goma, voters who began queueing before the cut-off of 5 p.m. were allowed to stay on to cast ballots.

In the Kinshasa district of St. Raphael, where a delay in voting sparked anger earlier, balloting was being allowed until 10 p.m., an African Union observer told AFP.

The election is Congo's first chance to have a peaceful, democratic transfer of power since independence in 1960 as longtime President Joseph Kabila steps aside.

At stake in the election is a country rich in minerals including those crucial to the world's smartphones and electric cars, and yet Congo remains desperately underdeveloped with widespread corruption and insecurity.

Meanwhile, Pope Francis prayed for those suffering from violence and Ebola in Congo, and is urging peaceful elections.

Francis asked faithful in St. Peter's Square on Sunday to join him in prayers and expressed hope that "all work to maintain a peaceful climate that permits peaceful and regular conducting of the elections."

Unrest had been feared after a last-minute decision to bar an estimated 1 million people from voting because of a deadly Ebola virus outbreak in the east. The decision has been widely criticized as threatening the credibility of the election.

In Beni, where voting was postponed until March, long after Congo's new leader will be inaugurated in January, a few hundred protesters staged mock elections. People cast paper ballots and many sang in Swahili, "Voting is our right and nobody can stop us."

Beni residents said they and others barred in Butembo city should have the right to have their votes counted.

Jacob Salamu, 24, and others washed their hands before voting as a protection against Ebola, which is spread via infected bodily fluids. "We do not have Ebola. Kabila is worse than Ebola," Salamu said. They will send their voting results to the electoral commission, he said.

The delay has been widely criticized as undermining the credibility of the election, while some health workers have said it politicizes the outbreak and puts them in danger. Some protesters in Beni have attacked Ebola facilities.

A rainstorm began voting day in the capital, flooding some streets. Kabila and Shadary voted together at the central Gombe Institute polling station.

"My message today to my compatriots is to come and vote for their candidates and brave the rain," Kabila said. Shadary called for "peace and calm," adding "I am very confident in victory."

"Today, we are writing the end of Kabila, the end of misery for Congolese people," he said as he cast his ballot. "Congo will stop being the laughingstock of the world."

If the elections are "free and fair," an opposition candidate will almost certainly win, said Jason Stearns of the Congo Research Group, based at the Center on International Cooperation at New York University.

Opinion polls make Fayulu the clear favorite, garnering around 44 percent of voting intentions, followed by 24 percent for Tshisekedi and 18 percent for Shadary, he said.

However, "the potential for violence is extremely high," he warned. Roughly half of respondents said they would reject the result if Shadary was declared winner, and would distrust DRC courts to settle a dispute fairly.

Almost the size of continental western Europe, the DRC is rich in gold, uranium, copper, cobalt and other minerals, but little wealth trickles down to the poor.

In the last 22 years, it has twice been a battleground for wars drawing in armies from central and southern Africa.

That legacy endures in the jungles of eastern DRC, where militias have carried out hundreds of killings.

Insecurity and an ongoing Ebola epidemic in part of North Kivu province, and communal violence in Yumbi, in the southwest, prompted the authorities to postpone the elections there until March.

Around 1.25 million people in a national electoral roll of around 40 million voters are affected.

Despite this, the elections in the rest of the country have gone ahead.

The provisional results will be announced on Jan. 6, final results on Jan. 15 and the new president sworn in on Jan. 18.