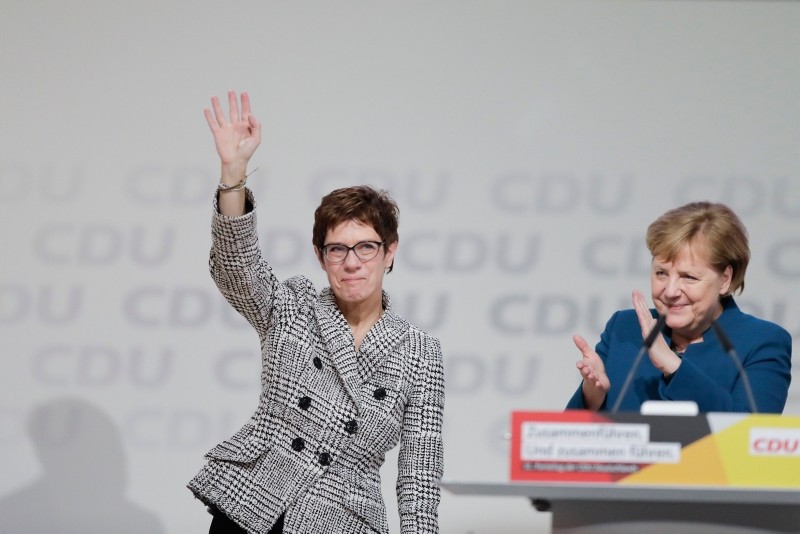 Annegret Kramp-Karrenbauer, the new leader of Germany's Christian Democrats, heads into 2019 more popular than Chancellor Angela Merkel, who supported her rise to the top of their party, an opinion poll showed on Sunday.

The survey by pollster Emnid for weekly newspaper Bild am Sonntag showed 45 percent of 507 voters surveyed wanted Kramp-Karrenbauer to play a leading role among Germany's top politicians in the coming year, ahead of Merkel on 40 percent.

Kramp-Karrenbauer, the continuity candidate favored by the party elite, won a tight victory over the more conservative Friedrich Merz in a run-off vote earlier this month to decide the new leader of the Christian Democratic Union (CDU).

The victory put her in poll position to succeed Merkel as chancellor.

The Emnid poll showed 33 percent of those surveyed wanted Merz to have as much impact as possible in 2019.

Merz, who returned from a decade in the political wilderness to seek the CDU leadership, has said he is ready to go back into politics full time and could even serve as a minister.

His narrow loss to Kramp-Karrenbauer, Merkel's protégé, highlighted deep divisions in the CDU that the party is eager to heal ahead of four regional elections next year.

Merkel, German chancellor for the last 13 years, decided in October to step down as party leader after the CDU hemorrhaged support in another regional vote.

A separate survey, by pollster YouGov, showed 43 percent of those questioned wanted Merkel to remain chancellor until the end of this legislative period in 2021, as she would like, with 38 percent wanting her to go early and 18 percent undecided.

Merkel's fate partly depends on her coalition partner, the center-left Social Democrats (SPD), whose leaders are under pressure from some in their ranks to pull out of the government and rebuild in opposition.

SPD leader Andrea Nahles said she was "bitterly disappointed" by the coalition, which formed in March, but that it had performed better in the last two months. She also sounded positive when asked about working with Kramp-Karrenbauer.

"In the new generation, we can concentrate on the essentials and do good work," Nahles told newspaper Welt am Sonntag.