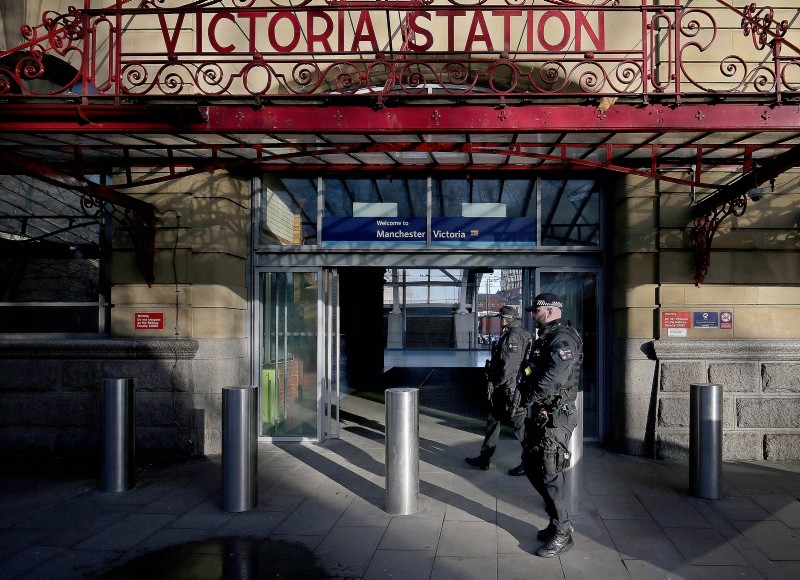 The stabbing of three people in a central Manchester station is being treat as a "terror related" incident, British police said on Tuesday.

The incident took place on New Year's Eve as the attacker stabbed a man and woman in their 50s, and a British Transport Police officer in Manchester Victoria Train Station. The victim's injuries were serious but not life-threatening.

A 25-year-old man has been arrested on suspicion of attempted murder.

"We are treating this as a terrorist investigation which is being led by counter-terrorism officers with support from Greater Manchester police," Chief Constable Ian Hopkins told a briefing.

"They were working through the night to piece together the details of what happened and to identify the man who was arrested."

Hopkins said counter-terrorism officers were searching an address near the city centre "which is believed to be where the man had most recently been living".

Prime Minister Theresa May thanked emergency services for their "courageous response" in swiftly tackling the suspect.

She wrote on Twitter: "My thoughts are with those who were injured in the suspected terrorist attack in Manchester last night."

No group has claimed responsibility for the attack, which happened at around 8:50 p.m. when many revellers in the city would have been enjoying New Year's Eve celebrations.

Witness Sam Clack, 38, a BBC radio producer, quoted the perpetrator as saying: "As long as you keep bombing other countries, this sort of shit is going to keep happening."

The witness added he heard the "most blood-curdling scream" and looked down the platform to see the attack unfolding.

"He came towards me," he added. "I looked down and saw he had a kitchen knife with a black handle with a good 12 inch (30-centimeter) blade.

"It was just fear, pure fear."

Clack said police used a stun gun and pepper spray before "six or seven" officers jumped on the man. 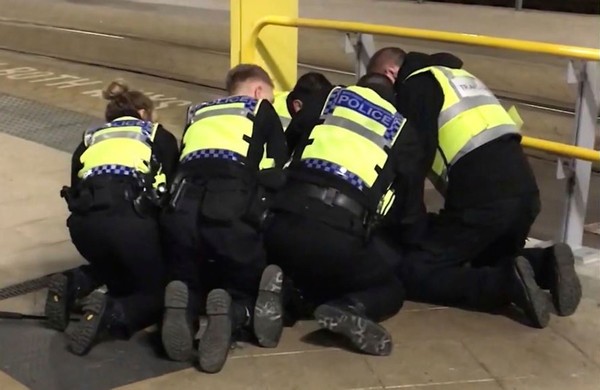 Footage of the incident shows him being overpowered by the officers.

The police said he was arrested on suspicion of attempted murder and officers had recovered two knives from the scene.

The woman suffered injuries to her face and abdomen and the man was wounded in the abdomen, while a British Transport Police officer sustained a stab wound to the shoulder.

Their injuries were described as serious but not life-threatening.

"My thoughts are with those who were injured in the suspected terrorist attack in Manchester last night," Prime Minister Theresa May said on Twitter.

"I thank the emergency services for their courageous response," she said.

British Transport Police said Tuesday its officers would be "highly visible through the national rail network".

He added the "vile attack" had "all the hallmarks... of an isolated incident".

Manchester police Assistant Chief Constable Russ Jackson said they were still trying to establish whether the suspect is a British national and how he came to be at the station.

"We are obviously considering his mental health given how frenzied the attack was, its random nature," he added.

"There is wide reporting... about what the attacker allegedly said during the incident.

"However it's really important to stress we are retaining an open mind in relation to the motivation for this attack."

Police said investigators were considering its closeness to the Manchester Arena, where a suicide bomber struck in May 2017, as potentially significant.

The terror attack at a concert by U.S. singer Ariana Grande killed 22 people and wounded 139.

The perpetrator, Salman Abedi, 22, was born and raised in Manchester.

"That the incident happened so close to the scene of the terrorist attack on May 22, 2017 makes it even more dreadful," chief constable Hopkins said.

"Our work will continue to ensure we get to the full facts of what happened and why it took place."

The terror threat level in the U.K. is severe, meaning a terror attack is highly likely.