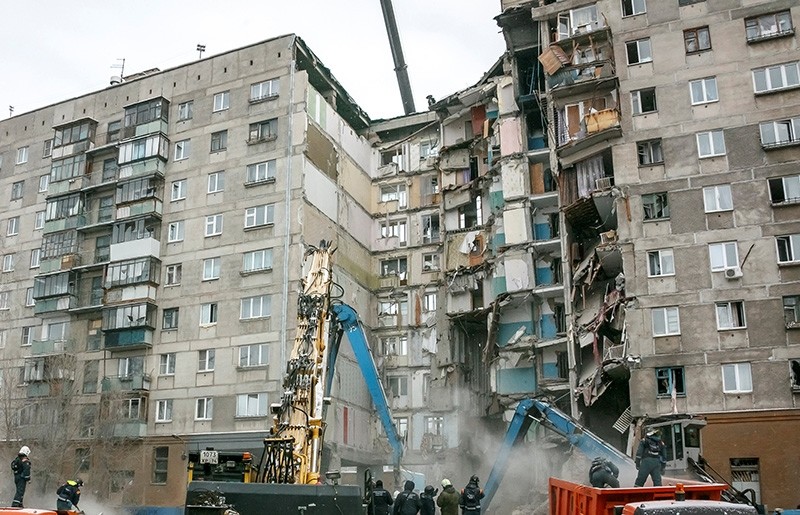 Russian Emergencies Ministry members work at the site of a partially collapsed apartment block in Magnitogorsk, Russia Jan. 3, 2019. (Reuters Photo)
by Jan 03, 2019 12:00 am

The number of dead from a New Year's Eve gas explosion in a Russian apartment block jumped to 39 on Thursday as rescuers finished searching for bodies in the rubble of the partially collapsed building.

Russian official Alexandre Tchouprian said that 38 of the 39 bodies had been identified and no more were expected to be found at the site in the Ural mountains city of Magnitogorsk.

"The emergency services have nothing more to do here -- the work is finished," Tchouprian was quoted as saying by the Interfax news agency.

Nearly 900 people involved in rescue and recovery efforts braved temperatures as low as minus 27 degrees Celsius (minus 16 degrees Fahrenheit) to search through mangled concrete and metal at the site.

Six people including two children were rescued at the site, but no survivors have been found since Tuesday when a 10-month-old boy was retrieved in what officials described as a "New Year's miracle."

The explosion tore through the 10-story building in the industrial city nearly 1,700 kilometers (1,050 miles) east of Moscow in the early hours of Monday.

The Soviet-era block was home to about 1,100 people and the explosion destroyed 35 apartments, leaving dozens homeless.

A bridge had been built to reach higher areas and one of the building's walls was taken down as it was threatening to collapse on rescue workers.

On Thursday, residents of other parts of the building were to be allowed to enter their apartments, in half-hour stretches, to recover some belongings, the ministry said.

All the survivors were in a stable condition, said the office of Chelyabinsk regional governor Boris Dubrovsky, who visited several of them in hospital on Thursday.

The health ministry also said that Vanya, the baby boy rescued on Tuesday, was recovering in hospital.

His condition was "stable, with some improvement," Russian news agencies quoted the ministry as saying.

The boy was found in his cradle after rescuers heard him crying from under the rubble. He was brought to his mother, who had survived the blast, and then flown to Moscow for treatment.

Dubrovsky's office said the governor had approved new financial assistance to the victims, including payments of 1 million rubles ($14,500, 12,700 euros) to the families of those killed and 400,000 rubles for those injured.

Families who lost their apartments would receive payments of up 500,000 rubles, as well as being provided with new homes.

Financial assistance was also to be provided to help pay for funerals, the first six of which were to be held on Friday, the governor's office said.

The explosion, which officials have said was likely caused by a gas leak, happened as most of the building's residents were asleep.

Witnesses described a "wave of fire" and said the blast was strong enough to shatter windows in nearby buildings.

Investigators have launched a probe, but have said there is no reason to suspect foul play.

Gas explosions are relatively common in Russia, where much of the infrastructure dates back to the Soviet era and safety requirements are often ignored.

Located in the mineral-rich southern Urals, Magnitogorsk, with a population of more than 400,000, is home to one of Russia's largest steel producers.