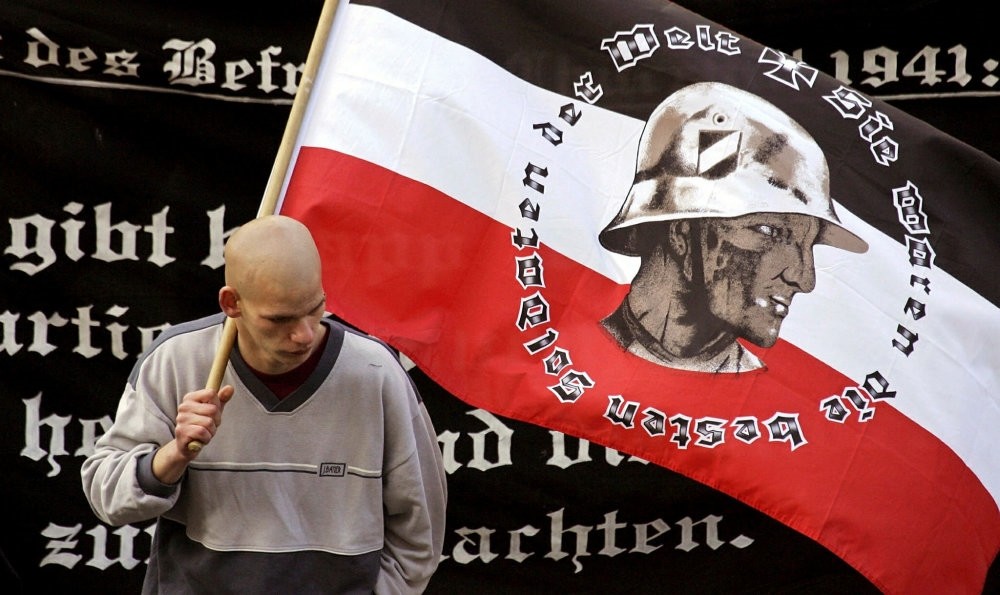 A supporter of Germany's far-right National Democratic Party at a Berlin rally.
by Daily Sabah with Wires Jan 05, 2019 12:00 am

Germany's Higher Regional Court of Brandenburg on Thursday ordered the release of a far-right politician who was convicted of an arson attack on a sports hall that had been designated to house refugees. In a ruling published on Thursday, Maik Schneider of the far-right National Democratic Party (NDP) was released. The court justified the release on the grounds of avoidable delays by the judiciary during the trial.

The 2015 arson attack destroyed a gym in Nauen, a town 40 kilometers west of Berlin. The attack caused property damage worth 3.5 million euros ($3.7 million). It was among a spate of hate crimes that was to shock Germany at a time when Europe's top economy took in an influx of refugees and migrants that neared 900,000 in 2015 alone.

Last July, German federal court overturned a far-right politician's conviction for burning down a building intended as refugee housing. At the initial trial in February 2017, Schneider received a jail term of nine and a half years. The judge, Theodor Horstkoetter, said the crime was clearly motivated by hatred of foreigners. "The attack was meant to signal to refugees: you are not welcome here, we don't have space for you, you aren't safe here," the judge said at a Potsdam court near the capital Berlin. Prosecutors charged that six men had formed a criminal organization by coordinating their actions in a WhatsApp group, reported by news site Spiegel Online. They had previously heckled at town events and yelled xenophobic slogans, set fire to the car of a Polish citizen, set off an explosive device at a supermarket, and thrown a bag of paint at the office of a left-wing politician.

The NDP is an "anti-democratic, xenophobic, anti-Semitic, anti-constitutional party," according to Chancellor Angela Merkel's office. However, a bid before Germany's highest court to outlaw the NPD failed in January 2017 when its judges ruled that the fringe party, although openly racist, was too insignificant to spell a real threat to the democratic order.

Germany has been showing increasingly hostile attitudes toward immigrants, the Muslim community and other minorities such as the Roma, according to a new study published last November. According to a report by the Leipzig-based Competence Center for Right-Wing Extremism and Democracy Research, more than one-out-of-three Germans think foreigners come only to exploit the welfare state. In August, massive far-right rallies rocked the city of Chemnitz, in eastern Germany where skinheads hounded migrants and performed the illegal Hitler salute. After the violence in Chemnitz, German police detained six men suspected of forming a far-right militant organization that assaulted foreigners in the eastern city of Chemnitz and also planned attacks on politicians. The men are alleged to have formed a group calling itself "Revolution Chemnitz." The arrests once again cast an uncomfortable spotlight on the growing far-right terrorism in Chemnitz, which is a stronghold of the far-right Alternative for Germany (AfD).