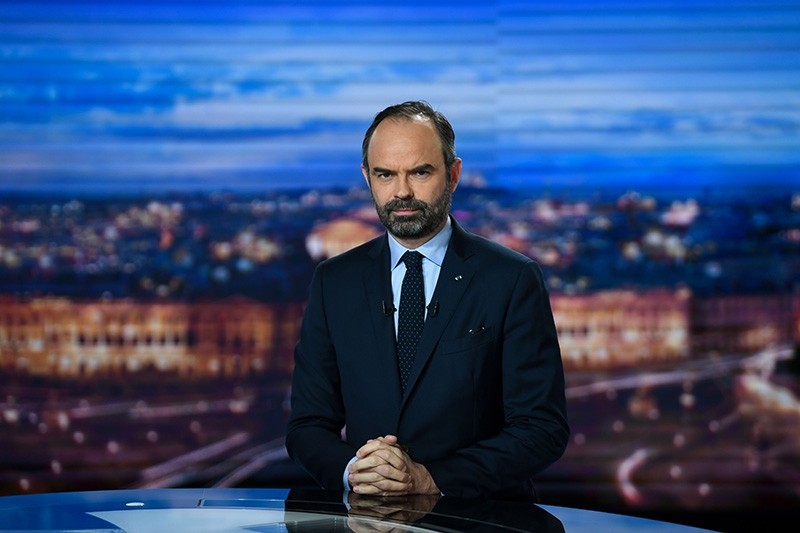 After images of renewed violence and destruction in Paris during the ‘yellow vest’ protests, the French government announced a ban on participation in unauthorized demonstrations

France plans to introduce legislation to toughen sanctions on undeclared protests in response to violent yellow vest demonstrations, Prime Minister Edouard Philippe said Monday in a hardening of the government's stance on the unrest.

"We need to preserve the right to demonstrate in France and we must sanction those who break the law," Philippe told TF1 television.

Seven weeks into an anti-government rebellion marked by weekly clashes in Paris and other French cities, Philippe said the government would back a "new law punishing those who do not respect the requirement to declare (protests), those who take part in unauthorized demonstrations and those who arrive at demonstrations wearing face masks."

He also announced plans to ban known "troublemakers" from taking part in demonstrations, in the same way known football hooligans in the past had been banned from stadiums.

"That measure worked well," he said, referring to the stadium ban.

In future, Philippe said, the onus would be on "the troublemakers, and not taxpayers, to pay for the damage caused" to businesses and property during the protests, which began peacefully in mid-November over taxes but quickly became radicalized.

Many of the protesters are demanding that the centrist President Emmanuel Macron to resign, which is dismissed as undemocratic by the government.

On Saturday, demonstrators used a construction site vehicle to smash open the doors of a government building. A former professional boxer was also caught on camera beating up police officers.

"Those who question our institutions will not have the last word," Philippe said, announcing plans to deploy 80,000 security force members nationwide for the next 'yellow vest' demonstration expected at the weekend.

A major poll by the Ifop group published in the Journal du Dimanche newspaper showed Macron's approval had slipped another two points in December, to 23 percent. The proportion of people who declared themselves "very dissatisfied" by his leadership jumped by six points to 45 percent.

Since the yellow vest demonstrations began, 5,600 people have been arrested and more than 1,000 were sentenced to prison, said Philippe. The images of renewed violence and destruction in Paris on Saturday underscored the difficulty of containing a leaderless movement that appeared to be petering out at the end of 2018 but has since gained new momentum.

Since November, demonstrations initially triggered by a tax hike on diesel fuel and expanded to encompass the high cost of living have led to violent clashes with police in Paris and other cities. Macron made multiple concessions that failed to extinguish the anger of the yellow vest movement, which is named after the fluorescent protective garments the protesters wear. He abandoned the tax hike and announced last month a series of measures to boost purchasing power. The package, estimated at 10 billion euros ($11.46 billion), includes a 100-euro monthly increase to the minimum salary.

Despite the protests, Macron has vowed to keep reforming the country this year to fulfill some of his electoral promises. Planned changes concern highly inflammatory topics: an overhaul of the indebted pension system and of France's relatively generous unemployment benefits. The government wants to apply the same rules to all new pensioners in order to replace the dozens of different systems specific to certain jobs. Macron promised the legal retirement age will remain at 62 but the changes might reduce some other advantages. The government also plans to apply stricter rules to obtain unemployment benefits. Other measures would allow job cuts among civil servants. The French government appears politically weakened by the yellow vest movement but can still pass new bills at parliament, where Macron's centrist party holds a strong majority.

In addition, the protesters drew support from an unlikely source on Monday when the two leading figures of the populist government in Rome urged the yellow vests to continue, in comments which risk ramping up Italy's war of words with Macron. "Yellow vests, do not weaken!" Deputy Prime Minister Luigi Di Maio, who heads the anti-establishment Five Star Movement (M5S), wrote on his party's blog. The move underscored the increasingly sour relations between Rome and Paris, which have previously clashed over immigration policy, among other issues.