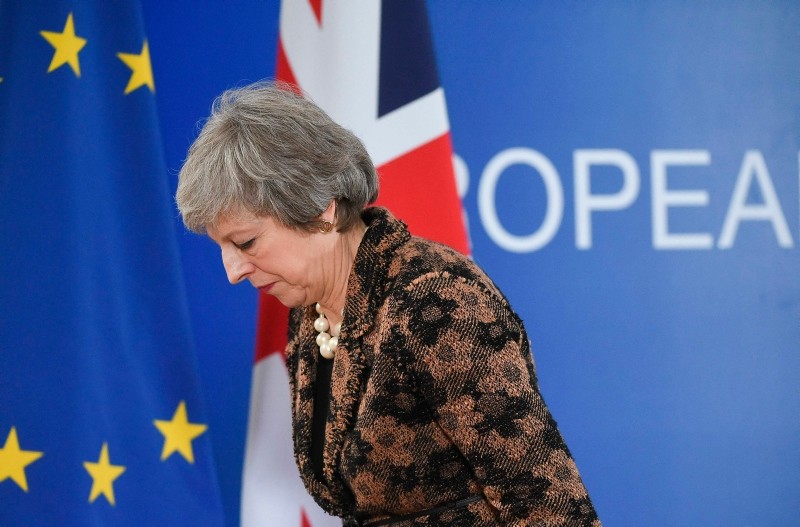 Britain's Parliament narrowly approved financial roadblocks that are designed to make it more difficult for the country to leave the European Union without a Brexit deal, giving a defeat to Prime Minister Theresa May's government Tuesday.

Lawmakers voted 303-296 to back a Finance Bill amendment that would prohibit government spending on "no-deal" Brexit preparations that Parliament didn't authorize.

The vote in the House of Commons illustrated the substantial opposition to the real possibility of Britain withdrawing from the EU on March 29 without a divorce agreement in place on the terms of its relationship with the remaining members.

Business leaders and some economists have predicted disruption in the lives of U.K. residents and financial damage if that happens. Without a trade deal in place, Britain could see tariffs slapped on its exports to the EU and possible food and medicine shortages.

But Britain has been headed in that direction because May has been unable to persuade a majority in Parliament to back the divorce deal her government negotiated with the EU.

Concerns about the risks of a "no-deal" scenario has prompted talk of postponing Brexit day and even calling another referendum on Britain's EU membership.

Jeremy Corbyn, leader of the opposition Labour Party, said the spending restriction lawmakers passed was "an important step to prevent a no-deal Brexit."

Earlier Tuesday, a government minister ruled out Britain seeking an extension to its March 29 date for leaving the EU. The date was based on the two-year breakup period that started when May gave official notice Britain was pulling out.

Brexit minister Martin Callanan told reporters in Brussels that May's government was not going to seek an extension to the countdown despite calls from some British politicians for a brake on the chaotic and uncertain Brexit process.

"We are leaving the EU on the 29th of March this year, because that's what Article 50 says, that's what Parliament voted for, and that's now what domestic British legislation says as well," Callanan said, referring to the EU regulation governing Brexit.

Britain can request an extension to the Brexit procedure, but the agreement of the other 27 EU countries would be needed, and the bloc's leaders said last month that they would need good reasons to prolong it. European leaders have said a second Brexit referendum could be one good reason to do so.

May continued to seek further concessions from the EU on Tuesday ahead of lawmakers voting on the unpopular withdrawal deal next week. The prime minister has pushed for fresh guarantees to ease its passage.

France insisted Tuesday that the EU can only offer political reassurances — not legally binding changes to the agreement — to help May persuade reluctant lawmakers to endorse the deal.

"We really need to have a ratification of the withdrawal agreement. This is the best solution for both parties," French European Affairs Minister Nathalie Loiseau told reporters.

The withdrawal agreement, which is required before more wide-ranging discussions on future relations can commence, foresees relatively close economic ties with Europe. That is particularly true in the immediate aftermath of Brexit to avoid the imposition of a hard border between EU member Ireland and Northern Ireland, which is part of the U.K.

As well as frustrating lawmakers who want a complete break from the EU, the plan's critics said the arrangement could result in the U.K. being "trapped" in the bloc's customs arrangement if a superseding agreement on future trade ties is not reached.

Some lawmakers have said they will vote against the deal because they prefer another referendum on Britain's EU membership.

The prolonged period of uncertainty has intensified political divisions over Brexit and led to some verbal confrontations in London.

Some 55 British legislators have expressed safety concerns in a letter to London's police chief after a lawmaker was verbally abused while discussing Brexit outside Parliament.

The letter said Britain had "months of peaceful and calm protests" expressing a wide variety of views on Brexit but that the debate recently attracted "an ugly element of individuals with strong far-right and extreme-right connections."

Soubry was repeatedly called a Nazi by protesters while she was being interviewed by BBC outside Parliament, where politicians routinely do live broadcast interviews.

Police said Tuesday they are beefing up their presence in the area as they try to balance the legitimate rights of protesters and the safety of legislators and journalists working there.

The issue of personal safety is seen as vital in view of the assassination of Labour Party lawmaker Jo Cox during the Brexit referendum held in June, 2016.