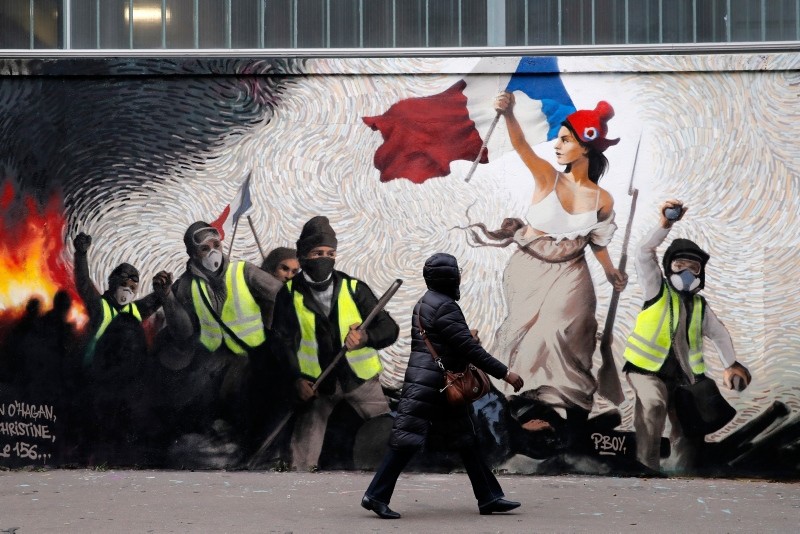 French officials said Friday they expect this weekend's "yellow vest" demonstrations to be bigger and more violent than a week ago, as the protest movement which had shown signs of fatigue gains fresh impetus.

National police chief Eric Morvan told France Inter radio he expected turnout to be on a par with mid-December for the ninth consecutive Saturday of protests, which have repeatedly ended in clashes with police and the destruction of property.

Paris police chief Michel Delpuech said he expected demonstrators in Paris to outnumber the estimated 3,500 that attempted to march on the National Assembly last week, and predicted they would be "more tempted by violence".

On Jan. 5, around 50,000 people wearing the movement's trademark high-visibility vests took part in protests nationwide, an increase on the previous week but far below the nearly 300,000 that turned out for the inaugural protest in mid-November.

In a first this week, thousands of protesters are expected to descend on the central cathedral city of Bourges, despite being banned from entering its historic center.

The level of participation Saturday will set the tone for the start next week of a national debate on voters' grievances.

President Emmanuel Macron is hoping the debate — a response to voters' demands for more of a say in national law-making — will help tamp down the protesters' anger.

But the process risks being hobbled by record levels of distrust towards politicians and representatives of the state.

Last week, a group of demonstrators used a forklift to ram the doors of the ministry of government spokesman Benjamin Griveaux, and a former professional boxer battered two police officers guarding a bridge over the Seine river.

"Week after week we have observed a drift towards increasingly violent behavior," Delpuech told France Inter radio, adding that symbols of state power had become the chief targets.

The weekly images of rioting are taking a toll on tourism in Paris, officials said Friday.

Christian Mantei of the Atout France promotional agency said international passenger arrivals at Paris airports fell by 5 to 10 percent in December year-on-year and that bookings for the coming three months were down 6.8 percent.

"People from Asia in particular are worried and need to be reassured," Tourism Minister Jean-Baptiste Lemoyne said.

The government is taking an increasingly tough line with the rural and small-town protesters, who accuse Macron, 41, of being deaf to the concerns of ordinary citizens and of favoring the rich over the poor in his policies.

Some are intent on forcing him from office.

"Those who question our institutions will not have the last word," Philippe said.

He also announced plans for legislation to ban known "troublemakers" from taking part in demonstrations.

Some protesters accuse the police of fanning the flames by using tear gas, rubber bullets and stun grenades against demonstrators.

A police captain in the southern city of Toulon was also filmed punching demonstrators last weekend.

Macron tried to take the heat out of the protests in December by announcing a 10-billion-euro ($11.5-billion) package of wage boosts and tax relief for low earners.