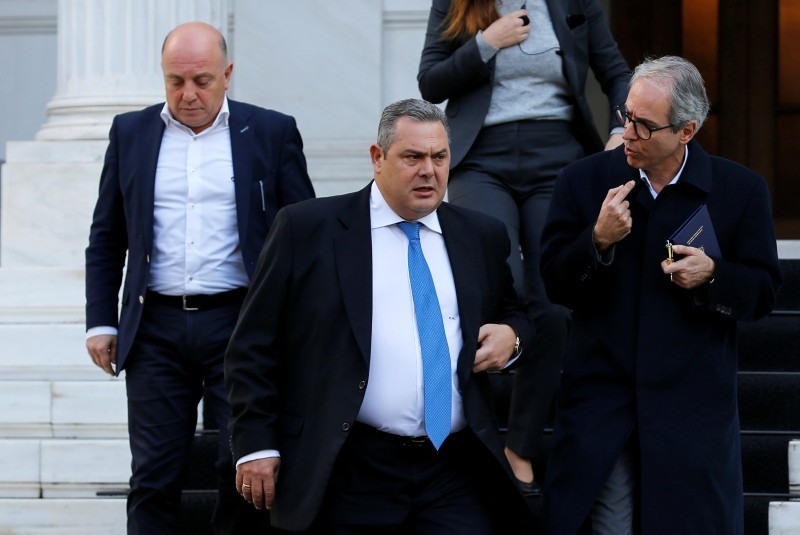 Defense Minister Panos Kammenos of the right-wing Independent Greeks (ANEL) said Sunday that his party will leave the ruling coalition of Prime Minister Alexis Tsipras of SYRIZA ahead of a crucial vote in the Parliament to end a 27-year dispute with Macedonia.

After a nearly 30-minute meeting with Tsipras at the Prime Ministry in Athens, Kammenos told reporters they took part in the government of national unity and pulled Greece from memorandums, but cannot resume their cooperation regarding the deal.

Kammenos has long opposed the accord with neighboring Macedonia signed by their governments last year.

"The Macedonia name issue... doesn't allow me not to sacrifice the minister's chair," Kammenos said. He said he would also pull six other ministers from his party out of the government.

The impact of the resignation on the governing coalition was not immediately clear. Parliamentary elections are due in Greece by October. Tsipras's coalition has 153 seats in the 300-strong parliament, 145 of them from his leftist SYRIZA party.

Tsipras hopes to rely on lawmakers from the small pro-EU To Potami (The River) party to get the agreement approved, while some of ANEL's lawmakers also remain ambivalent to the deal.

Addressing reporters later on Sunday, Tsipras said he accepted the resignation of Kammenos, adding that he will continue to push forward with agreement, which needs 151 votes to be ratified in the Parliament. He said that he believes he can find the required six votes.

Tsipras added that Admiral Evangelos Apostolakis, who held the post of the chief of the Hellenic National Defence General Staff since 2015, will replace Kammenos as the new defense minister.

In June 2018, Greece and Macedonia inked Prespa Agreement, which requires Macedonia to change its name to the Republic of North Macedonia and Greece to drop its objection to Macedonia joining the North Atlantic Treaty Organization (NATO) and becoming a member of the European Union.

Macedonia was founded in 1991 and recognized by the UN in 1993, but was accepted to the UN membership with the name of Former Yugoslav Republic of Macedonia (FYROM) due to Greek objection to the name Macedonia. Many countries, including Turkey, recognize Macedonia with its present name.

Kammenos, who forged a coalition pact with Tsipras in 2015, has never hidden his hostility to the deal with Skopje. Greece has a province called Macedonia and long demanded Skopje change its country name to remove what Athens considered to be an implied claim to Greek sovereign territory.

Macedonian lawmakers voted to rename their country the Republic of North Macedonia on Friday and the agreement now needs backing from the Greek parliament to come into effect.

Meanwhile, ahead of the vote in Athens, two news websites alleged that a prominent member of Greece's main opposition New Democracy party -- which rejects the name deal -- called on its members to phone lawmakers of the ANEL party and urge them to vote against the agreement.

The investigation, according to judicial sources, is looking into whether personal data was violated as part of the probe.