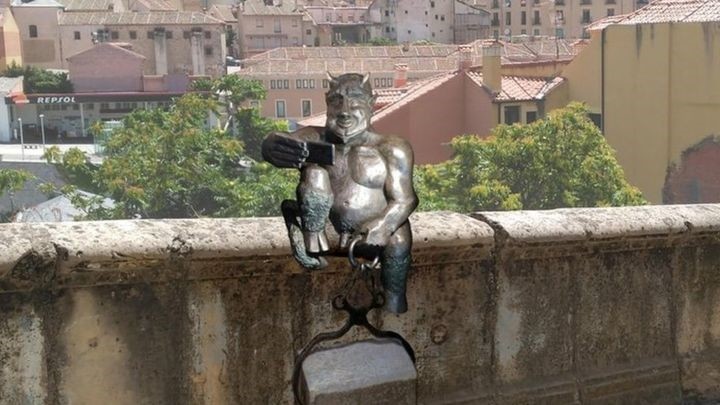 Residents of Spain's Segovia city have launched a petition against a demon sculpture on a historical bridge, claiming it was too joyful for the Satan and thus offensive to Catholics, media reports said Tuesday.

Local authorities decided to put the sculpture inspired by an old myth which claims the demon Mephistopheles, a famous satanic figure mentioned in Renaissance Western literature, including the German classic Faust, built the city's famous aqueduct in a single night, not Romans.

However, the sculpture which shows Satan as a smiley creature taking a selfie with a smartphone sparked controversy in the city, with many complaining that it is too friendly-looking. More than 5,400 residents - over 10 percent of the city's population – have already signed a petition calling for the sculpture to be removed while it is reported that a judge will look into the artwork to determine whether it is offensive to Christians.

The petition states that Satan is supposed to be "repulsive and despicable - not kind and seductive, like that of the 'good-natured devil' without malice."

Saying that the sculpture aims to boost the city's tourism, Claudia de Santos, who is in charge of the city's heritage, told Spanish daily El Pais that "If the sculpture works, there will be more people in the area of the north wall, which is also very important for Segovia, but less visited than the areas around the aqueduct."

José Antonio Abella, the artist who made the sculpture, said he doesn't understand why people are against it, adding "I just wanted to pay homage to my city and to create something to give back all I have been given."