Macron says France to stay 'militarily engaged' in Mideast in 2019 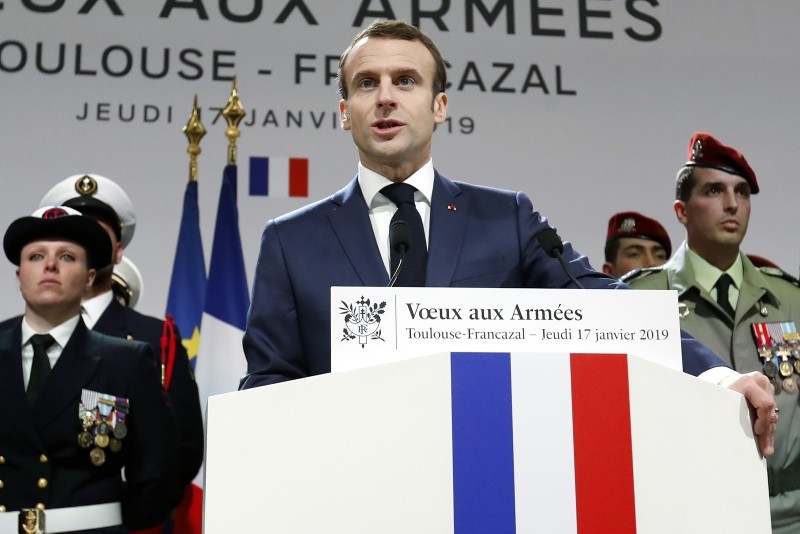 French President Emmanuel Macron delivers his 2019 New Year's wishes to the military forces during his visit of paratroopers of the 11th Parachute Brigade of the Infantry at the air force base 101 Toulouse-Francazal, near Toulouse (AFP Photo)
by Compiled from Wire Services Jan 26, 2019 3:38 pm

"The retreat from Syria announced by our American friend cannot make us deviate from our strategic objective: eradicating Daesh," Macron said in a speech at an army base in southern France.

Citing the death of 16 people, including four Americans, in a suicide bombing in Manbij, Syria, near the border with Turkey, Macron said the next few months would be decisive.

"We will remain militarily engaged in the Levant in the international coalition (...) over the coming year," he said.

The French military has deployed 1,200 soldiers as part of the anti-Daesh efforts, via air operations, artillery, special forces in Syria and training for the Iraqi army.

"The fight is not over," Macron said, adding that in the coming months "we shall revise our global military deployment" but "we shall remain committed to participating in stabilisation" in the Middle East region.

France has been involved in Syria since 2015, mostly through airstrikes, as a member of the international coalition fighting Daesh.

He reiterated his ambition to establish a European military force for rapid intervention in case of conflict.