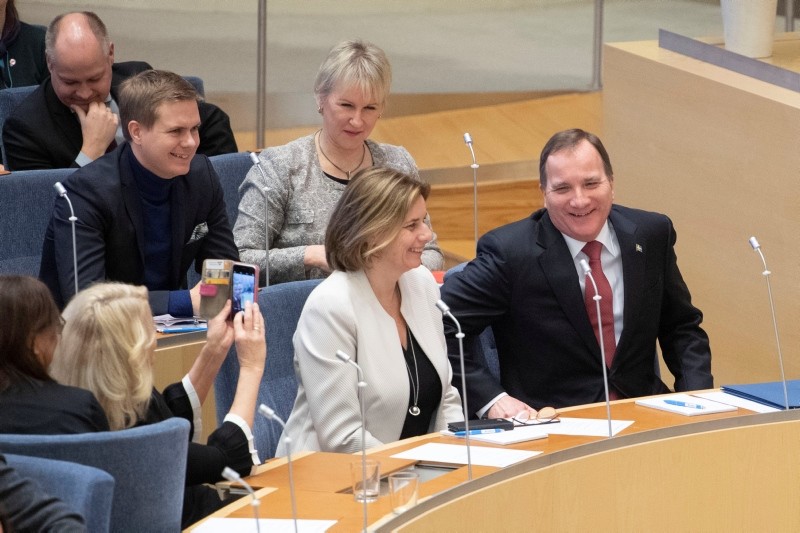 The vote in Riksdagen, or parliament, was 153-115 in favor of Lofven, with 77 abstentions.

Lofven agreed to a historic deal with the Center, Liberal and Green parties last week, bringing together parties from the center-right and center-left in order to prevent the anti-immigration Sweden Democrats from having a voice in policy and save one of Europe's few left-wing governments.

The deal will see Lofven, a former welder and union leader, cut taxes and deregulate the labor and property rental market, a sharp shift to the right that is likely to alienate many of the Social Democrat's traditional supporters.

His own Social Democrats and the Greens backed him and the center-right bloc voted against, while three smaller parties abstained in Friday's ballot.

In Sweden, a prime minister can govern as long as there is no majority against him or her.

Swedish politicians have been trying to form a government without the Sweden Democrats, which has neo-Nazi roots. Parties have refused to cooperate with Sweden's third-largest party, which made great strides in the Sept. 9 national election.

"We have chosen another path," he said.

"My ambition now is that the Sweden Democrats will be a dominating forced in a new strong center-right opposition," he said.

The September election produced a hung parliament with the left-leaning side and the center-right bloc securing about 40 percent of the vote each, leaving neither with a majority and paving the way for months of complex coalition talks.

To get the support from two center-right parties, Lofven had to compromise over labor laws, causing irritation from his party's union backers and the Left Party.

Lofven who heads Sweden's largest party but has no majority, will present his government and start his second term as prime minister on Monday.

It will be one of the weakest administrations in Sweden in 70 years, with just 32.7 percent of voters having cast ballots for the two parties.

Together with the Centre and Liberals, the four parties hold 167 of 349 seats in parliament, eight fewer than the 175 that constitutes a majority in the Riksdag.
RELATED TOPICS