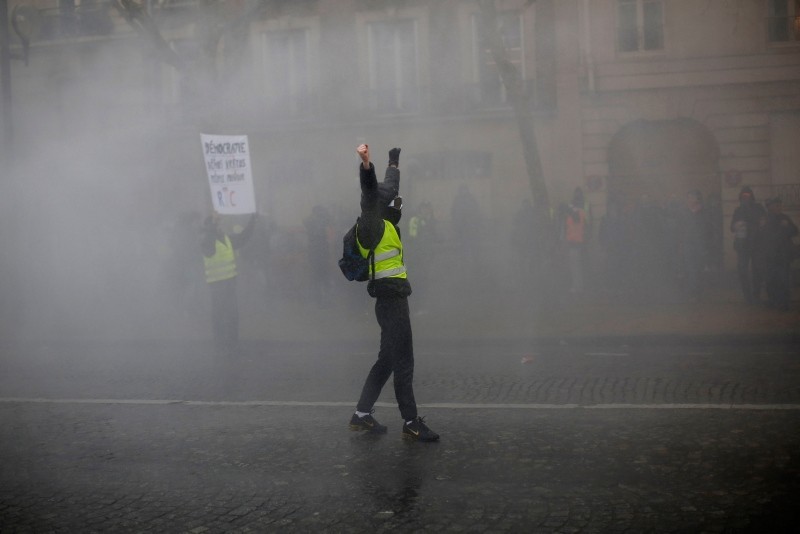 France's "yellow vests" took to the streets on Saturday for a 10th straight weekend of anti-government protests, despite attempts by President Emmanuel Macron to channel their anger into a series of town hall debates.

In Paris, several thousand people, many waving placards calling for Macron to resign or condemning police violence, marched peacefully through the Left Bank in freezing temperatures.

"Parisians, rise up!" they chanted, urging residents of the capital to join the movement which has been led by rural and small-town France.

At the end of the march, clashes broke out around the Invalides war museum, with police using tear gas and water cannon to disperse hooded protesters who threw paving stones and bottles.

Demonstrations were also held in other major cities, with clashes reported in the western city of Rennes and eastern city of Lyon.

Turnout was being closely watched for signs of possible fatigue in the movement as it enters its third month and Macron's "great national debate" gains momentum.

Some 80,000 police were deployed to keep the peace.

Last week, an estimated a total of 80,000 people took part in protests that were markedly less violent than several previous editions, which ended in clashes with police, the torching of cars and shopfronts being smashed.

Michel, a 53-year-old computer engineer from the Paris suburbs who did not wish to give his full name for fear of losing his job over his radical politics, was taking part in his ninth demonstration in as many weeks.

The father of three said he intended to boycott the debates organised around the country on some of the issues raised by the yellow vests.

"It's over. We're divorcing our elites and there can be no getting back," he said, adding: "People are starving but for them everything is fine. They have to go!"

By giving the protesters a forum to air their grievances Macron hopes to lure them off the streets.

This week, he kickstarted two months of nationwide discussions on issues ranging from taxation to public services, spending over 12 hours debating with mayors at separate gatherings in the north and southwest of the country.

The debates mark a return to form for the combative 41-year-old president, who was elected at the head of a grassroots movement that went door-to-door asking the French what kind of changes were needed.

A prodigious debater, he vigorously defended his reforms.

Many "yellow vests" see the debates as an attempt to drain support from their movement, which erupted in mid-November over fuel taxes but quickly grew into a broader anti-Macron and anti-globalisation revolt.

Marie-Helene Guais, 60, accused the government of "not addressing the real issues".

"What I want is citizen-sponsored referendums so that citizens can repeal laws, oversee spending and recall senior officials or even the president if they want," she said, echoing one of the protesters top demands.

The growing number of demonstrators to suffer serious injuries at the hands of the police has compounded their hostility towards the state.

The "Disarm" collective, a local group that campaigns against police violence, has counted 98 cases of serious injuries, including 15 cases of people losing an eye to rubber bullets.

The police have pointed to several attacks on officers as justification for their sometimes heavy-handed approach.

Macron is looking to the debates to reconnect with the French and try salvage his reform agenda.

He has assured that there will be "no taboos".

But he has refused to consider reinstating a fortune tax on high earners which he partly repealed in one of his first, and most unpopular, acts as president.

In December, he also unveiled a 10-billion-euro ($11.5-billion) package of wage increases and tax relief for low earners and retirees.

But the measures fell short of the mark for the protesters, who are demanding a radical policy shift in favour of low earners, buoyed by opinion polls that show widespread sympathy for their cause.