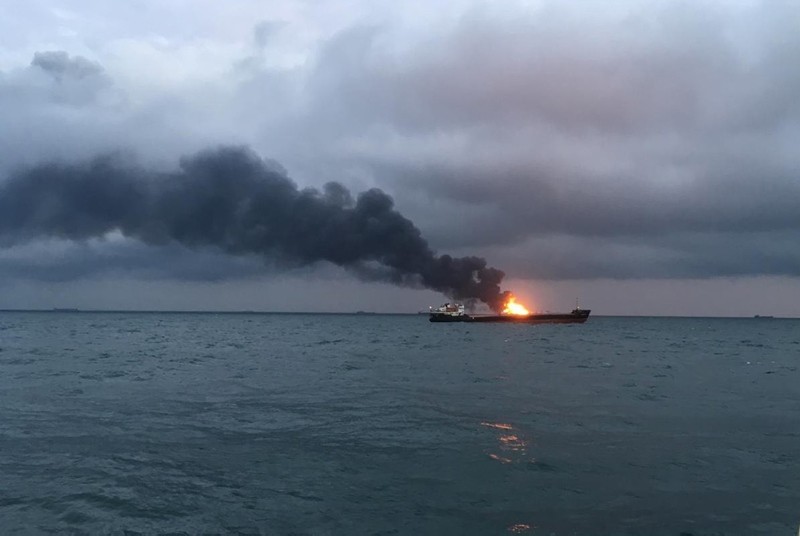 Up to 20 are presumed dead after two ships caught fire in the Kerch Strait near Crimea on Monday, authorities said, with a rescue operation still underway.

The fire broke out when one vessel was transferring fuel to the other on Monday, driving both crews to jump overboard. The accident occurred off the southern coast of Crimea, at the entrance to the Kerch Strait, which connects the Black Sea and the Sea of Azov.

The other 10 people were missing and most likely dead, he said.

"There is no hope of finding them alive," Kravchenko said. "It is no longer a rescue operation."


Three of those missing sank into the water "before rescue workers' eyes" without life jackets, he said. Reports said some who jumped overboard suffered burn wounds and hypothermia.

The ships, Candy (Venice) and Maestro, both bore Tanzanian flags and one was a gas tanker. They were crewed by 31 people total — 16 Turkish nationals and 15 Indian nationals.

Kravchenko said that as of Tuesday morning the fire was continuing. "There's an endless amount of fuel there," he said.

Authorities in the Crimean city of Kerch were preparing to receive the victims, Kravchenko said Monday evening.

India said it was in touch with the Russian authorities.

"Our embassy in Moscow is in constant touch with the concerned Russian agencies to get more information on Indian nationals affected in the incident and to extend necessary assistance," the Indian foreign ministry said.

The Kerch Strait between Russian-annexed Crimea and southern Russia controls access from the Black Sea to the Azov Sea, where there are both Russian and Ukrainian ports.

Ships must often wait weeks before being allowed to pass through the Kerch Strait to the Sea of Azov. Ukraine has alleged that ships that want to sail on to Ukrainian harbors are hassled by Russian authorities.

In November, Russia detained three Ukrainian navy vessels and their crews in the Black Sea near the Kerch Strait, fuelling tensions between the two countries. Russia annexed Crimea from Ukraine in 2014.