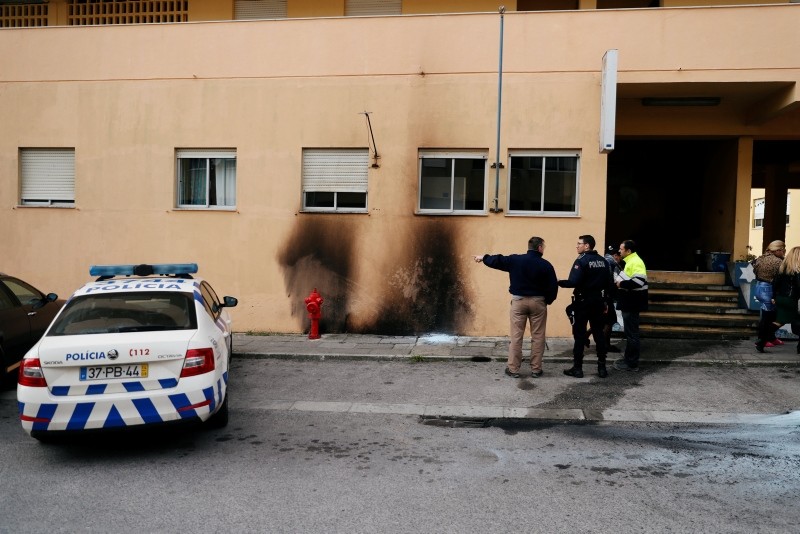 The police officers are seen near the damage caused by molotov cocktails is seen on the police station building at the Bela Vista neighborhood in Setubal, Portugal January 22, 2019. (Reuters Photo)
by Jan 22, 2019 12:00 am

Unidentified attackers threw petrol bombs at a police station in the Portuguese city of Setubal and torched cars in the capital Lisbon on Tuesday, hours after a protest against alleged racially-motivated police violence ended in clashes.

Police said in a statement that three petrol bombs caused damage to the station in the early hours of the morning but nobody was hurt. They reinforced patrols to guarantee residents' safety.

The fire blackened the stairs and a wall of the station, but no other damage could be seen from the outside.

Police said their investigation could not establish any links to a rally in central Lisbon on Monday night, which followed a police raid on a predominantly black neighborhood in Seixal, on the outskirts of the capital south of the Tagus River. Setubal is about 50 kilometers south of Lisbon.

Police responded on Sunday to a call about a brawl between two women and entered the "Jamaica" neighborhood in Seixal, where mostly young local residents greeted them with a hail of stones.

A video published on the internet showed police officers beating up several black people. Four local residents and one police officer suffered minor injuries and were treated in hospital. One person was arrested and later released.

A young woman, who asked not to be named, told Reuters she had filmed the incident and denied stones were thrown. "We want justice and we hope they are charged," she said.

Lisbon's public prosecutor's office said it would investigate the incident.

Julieta Luvunga, 53, who is originally from Angola and lives in the neighborhood, said police hit her, she lost consciousness and had to be taken to hospital.

"I never thought police would hit me. We see this happening in other countries, like the United States, but I never thought it would happen here," she told Reuters.

Police said on Tuesday that one person was arrested on suspicion of torching four vehicles and a dozen garbage cans in greater Lisbon's Odivelas district.

There are several poor neighborhoods on the outskirts of Lisbon where immigrants mostly from Portugal's African ex-colonies live.

Race-related violence is rare in Portugal but in one incident in Lisbon in 2015, 18 police officers were accused of crimes motivated by racism. Seventeen of them are now on trial.