Germany donates $13.7M to Russia for reconciliation purposes on the WWII Siege of Leningrad 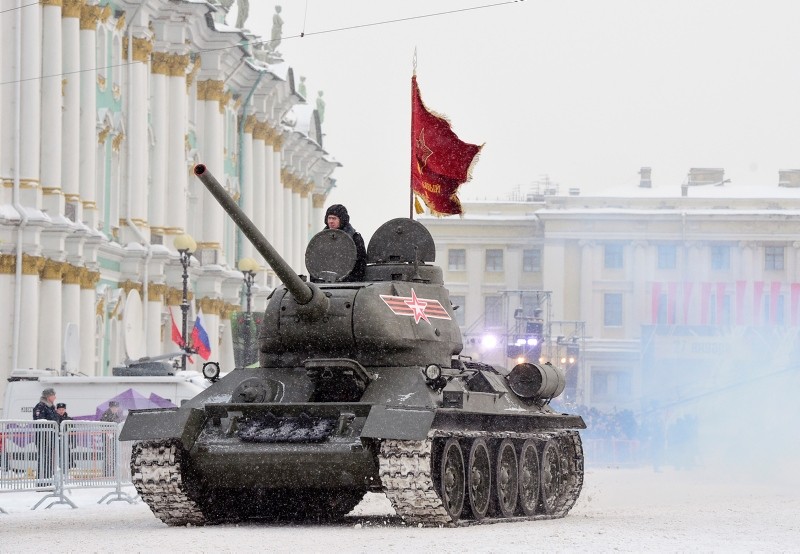 A Soviet WWII-era T-34 tank drives during the military parade marking the 75th anniversary of the lifting of the Nazi siege of Leningrad, at Dvortsovaya Square in Saint Petersburg on Jan. 27, 2019. (AFP Photo)
by Compiled from Wire Services Jan 27, 2019 4:53 pm

Germany donated 12 million euros ($13.7 million) to Russia on the 75th anniversary of the end of the Nazi-led Siege of Leningrad to "benefit historical reconciliation," the countries said Sunday.

The "humanitarian gesture" will contribute to upgrading a veteran's hospital and creating a Russian-German community center, the countries' foreign ministries said in a joint statement.

"We are confident that this voluntary action will improve the quality of life of blockade survivors and will benefit historical reconciliation between the peoples of both countries as fundamental for future bilateral relations," the statement said.

More than a million people died in the two-and-a-half-year-long siege, on what is now Russia's second-largest city, St. Petersburg, which was renamed as Petrograd with the outbreak of World War I in 1914 and Leningrad with the Bolshevik Revolution in 1917.

The United States alleges that a member of the nuclear-capable Iskander-M family of missiles, the 9M729, violates a decades-old, bilateral treaty banning mid-range, ground-based nuclear weapons. Russia denies the allegation.

More than 2,500 soldiers and 80 units of military equipment also paraded on Sunday as snow fell and temperatures hovered around minus-18 degrees Celsius (0 Fahrenheit). The vehicles included a T-34 tank; such tanks played a key role in defeating the Nazis and became a widely revered symbol of the nation's wartime valor and suffering. 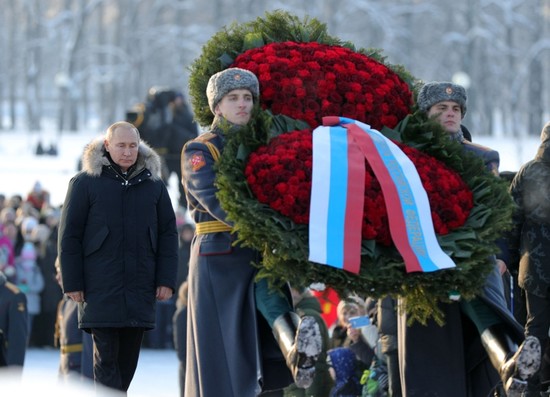 Russian President Vladimir Putin laid a wreath of flowers in a ceremony at a war memorial in the city's Piskarevskoye Cemetery, the Kremlin said in a statement. Among those who succumbed to the deprivations of the siege was Putin's 1-year-old brother. Putin himself was born after the siege, in 1952, and grew up in post-war Leningrad. His mother survived the siege. His father was severely wounded while serving on the front.

The Russian president did not attend the parade, which some civic groups had objected to as inappropriate, saying the day should commemorate the victims rather than flaunt military strength.

The Kremlin also announced Sunday that Putin had signed an order allocating 150 million rubles ($2.3 million) for creating new exhibits at the state museum of the siege. 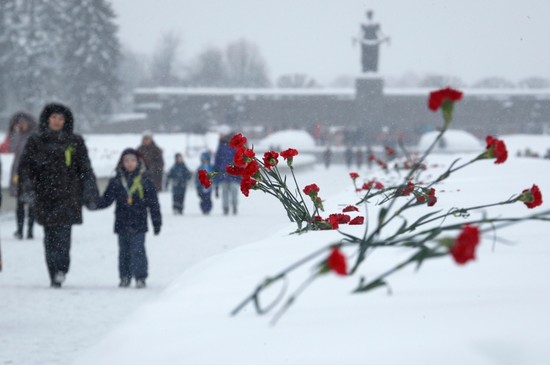 People walk in snowfall to place flowers to the Motherland monument at the Piskaryovskoye Cemetery where most of the Leningrad Siege victims were buried during World War II, in St. Petersburg, Russia, Saturday, Jan. 26, 2019. (AP Photo)

Blockaded Leningrad, the former capital of the Russian empire, held fast against the threat of invasion for more than 870 days between 1941 and 1944 as residents starved to death.

"The biggest risk was malnutrition," 86-year-old Natalia Khatuntseva, who survived the siege, wrote in a memoir. "Shelling and bomb raids, albeit scary, never threatened my family in comparison with the food shortage."

Khatuntseva was a girl when Nazi and Finnish forces surrounded the city of her birth. Her father succumbed to malnutrition within half a year of the siege.

During the siege, most Leningrad residents had to survive on rations of just 125 grams (less than 0.3 pounds) of bread a day and whatever other food they could buy or exchange at local markets after selling their belongings.

As Axis forces pushed into the Soviet Union, the Finns, in a loose alliance, sought to reclaim territory taken in the 1939 Soviet invasion of Finland. Leningrad was on the border of that territory.

"Today we mourn those who died defending Leningrad, who at the cost of their lives broke through the blockade. We recall those who worked in the besieged city, who, risking themselves, delivered bread and medicine along the Road of Life," Prime Minister Dmitry Medvedev wrote on social media.

Medvedev was referring to the ice road across Lake Ladoga that was the only conduit for supplies and evacuations during much of the siege.

The siege was "one of the worst tragedies of humankind in the last century," said Ivan Kurilla, a history professor at the European University in St Petersburg.

The Soviet Union suffered a total of more than 20 million casualties during the war.

"Many talented people died," Kurilla said. "My country could be very different if those people had lived their whole lives. This is a big sorrow about that war."

Tamara Chernykh, 81, told The Associated Press that she still can't forget the tiny pieces of bread that her granny used to put under her pillow as a night treat for a starving four-year-old girl in besieged Leningrad during the deadly winter of 1941-1942.

In the daytime, Chernykh said she and her baby cousin mostly stayed put under several blankets in the darkness. There was no heating during the first and the coldest winter of the siege, when temperatures outside sometimes plunged to -40 degrees Celsius (-40 degrees Fahrenheit).

Chernykh's grandmother, who gave the bread out of her own scant food ration, said the crumbs would bring good dreams. She died from starvation before the siege ended.

Eight in 10 Russians see the Allied victory of 1945 as an enduring source of national pride after three-quarters of a century, Russia's largest independent pollster, Levada Centre, said last week, presenting the results of a nationwide survey.