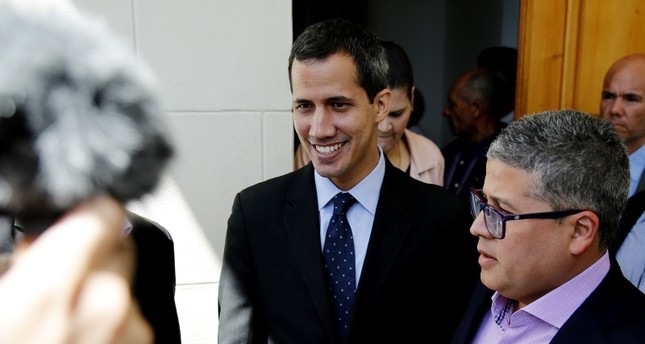 The president of the Venezuelan National Assembly Juan Guaido (C), arrives at the Parliament headquarters, in the Federal Legislative Palace, in Caracas, Venezuela, 29 January 2019. (EPA Photo)

In a move to create chaos over Venezuela’s internal politics, the European Parliament recognized opposition leader Juan Guaido as the de facto head of state

EU lawmakers voted 429 in favor to 104 against, with 88 abstaining, at a special session in Brussels to recognize Venezuelan congress head Guaido, who illegally declared himself interim president last week. The European Union was nervous at the precedent of a self-declaration and has been reluctant to follow the United States and most Latin American nations with immediate recognition of Guaido.

Britain, France, Germany and Spain said on Saturday, however, that they would recognize Guaido unless Maduro called elections within eight days; however, the EU has a whole has not set a time limit in its call for a new presidential vote.

Maduro has dismissed the demands as an unacceptable ultimatum from the corrupt elite of spent colonial powers. "The leaders of Europe are sycophants, kneeling behind the policies of Donald Trump," he said at the weekend.

In an interview with Moscow's RIA news agency on Wednesday, Maduro reiterated he was ready for talks with the opposition but rejected calls for a snap election as blackmail. "I won legitimately," he said. "If the imperialists want a new election, let them wait until 2025."

The Venezuelan leader began a second six-year term on Jan. 10, having won elections in May that were boycotted by the opposition and rejected by 12 Latin American nations, including Colombia and Brazil.

Earlier on Thursday, Maduro met troops in Caracas and called on the military to guarantee that "North American imperialism" would never enter Venezuela. Venezuela's armed forces remain the key to Maduro's hold on power. After Guaido declared himself interim president, the country's defense minister, Vladimir Padrino, himself a general, declared 56-year-old Maduro "the legitimate president" and vowed to defend his authority against an attempted "coup d'etat." Following Padrino's lead, eight generals, in turn, reiterated their "absolute loyalty and subordination" to the socialist leader in messages carried on state television.

Maduro accused U.S. President Donald Trump of ordering his assassination. Maduro, facing the biggest challenge to his rule since replacing Hugo Chavez six years ago, said Trump had ordered neighboring Colombia to murder him on Wednesday. Bogota and Washington have routinely denied the accusations.

However, speculation of military action against him was fueled this week when Trump adviser John Bolton carried a notepad with the words "5,000 troops to Colombia." Maduro has repeated his frequent warning that a U.S. invasion is imminent. He earlier accused Bolton of overseeing a plot to replace him with a dictator. He alleged that Washington is using "dirty dollars, bled from the U.S. empire" to train 734 mercenaries in neighboring Colombia to carry out the plot.

Share on Facebook Share on Twitter
Previous in Europe Refugees and migrants attempting to reach Europe via the Mediterranean... Next in Europe In the latest of a series of German government plane failures, German...
DAILY SABAH RECOMMENDS