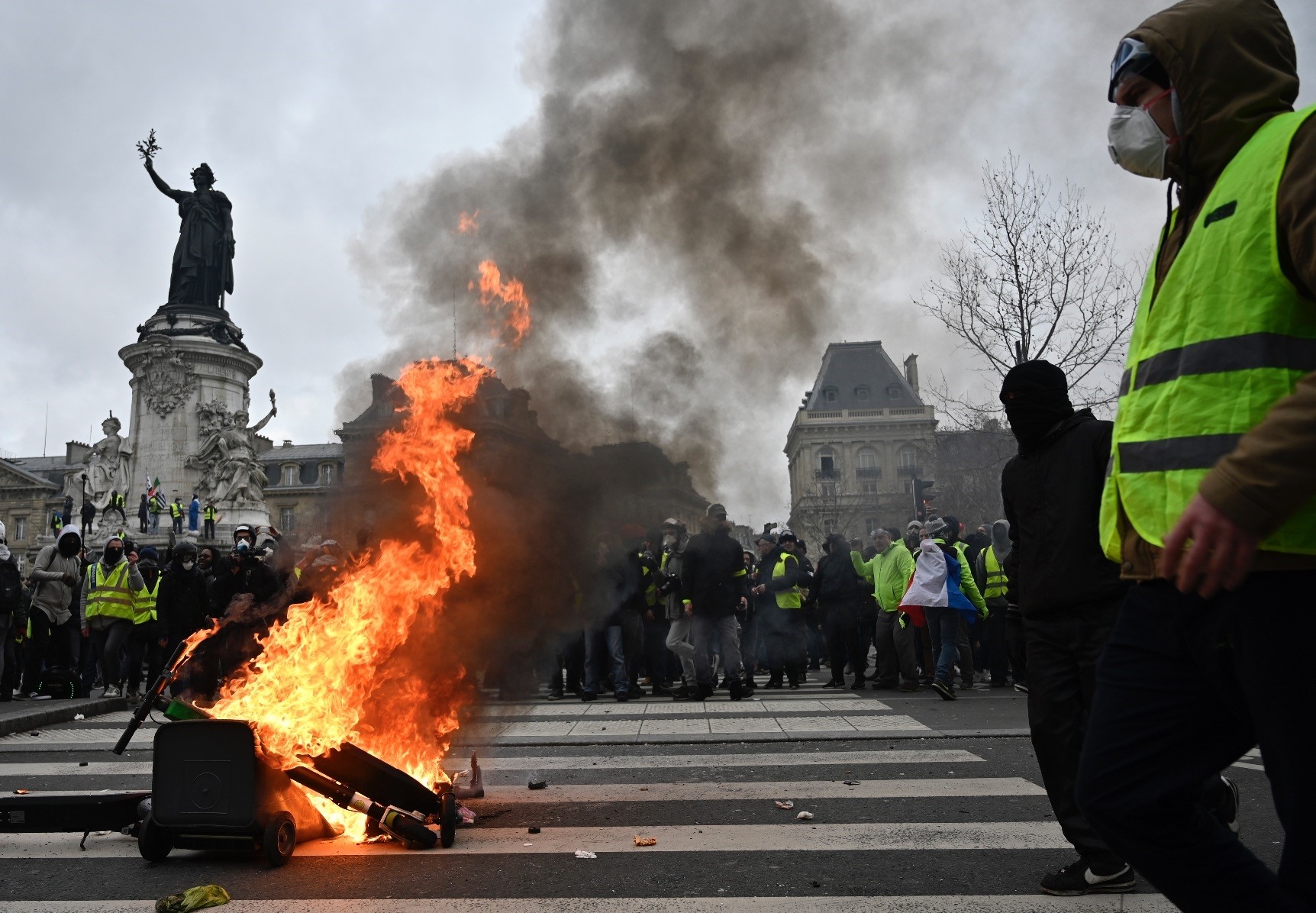 u2018Yellow Vestu2019 protests have been held for a dozen weekends since November in response to rising fuel taxes and President Emmanuel Macron's perceived anti-middle and working class policies. The Square of the Republic, Paris, Feb. 2, 2019.
by Compiled from Wire Services Feb 04, 2019 12:07 am

Demonstrating against police brutality and the use of tear gas, "yellow vest" protesters marching to the center of Paris were wounded by tear gas launched by security forces amid the 12th week of countrywide demonstrations over the weekend. The French government warned on Friday that police would not hesitate to use flash bangs in the case of violence by demonstrators after they were authorized by France's highest administrative court.

Protesters in Paris on Saturday paid homage to those injured in the past months, denouncing the use of flash ball riot control guns banned in much of Europe.

Between 10,000 and 13,800 protested in the capital, according to police and independent media estimates. Riot police used tear gas to disperse some protesters, who set fire to trash cans and a scooter; although the situation remained relatively calm compared to previous weekends. Thousands also took to the streets in other cities, including Tours, Valence, Marseille and Bordeaux. Tensions were also high in the towns of Nantes and Valence, where authorities announced the arrests of 18 protesters. Two police officers were injured during the protests in Nantes. Paris police headquarters said a total of 22 people were arrested in Paris.

About 1,000 police officers have been injured along with 1,700 demonstrators since the start of the protests, according to official figures.

"It's true that this intermediate weapon can hurt, but faced with rioters, the police need it to defend themselves against those who attack them," said Interior Minister Christophe Castaner.

As in previous weeks, protesters on Saturday carried French flags and held signs attacking French President Emmanuel Macron as out of touch or calling for referendums tabled by citizens. Protesters injured in previous weeks of violence were put at the front of the protests with some wearing eye patches with a target sign on them. The Interior Ministry said 80,000 security officials had been mobilized, including 5,000 in Paris.

The yellow vest movement originally started against fuel tax hikes but has snowballed into a wider revolt against a president and government accused of being out of touch with ordinary people. Rioters ran amok in Paris during the early street protests, torching cars, smashing luxury boutiques and defacing the Arc de Triomphe.

It was among the worst violence the capital has experienced since a 1968 student uprising. Violent clashes with police have persisted on the fringes of weekly marches in Paris, Toulouse, Bordeaux and other cities. At least 10 people have died in the protests, around 6,000 have been detained and over 2,000 others have been injured.

Many of the yellow vest demonstrators are demanding that centrist President Emmanuel Macron resign; a demand dismissed as undemocratic by the government. Macron made multiple concessions that failed to extinguish the anger of the yellow vest movement, which is named after the fluorescent protective garments the protesters wear. He abandoned the tax hike and announced last month a series of measures to boost purchasing power. The package, estimated at 10 billion euros ($11.46 billion), includes a 100-euro monthly increase to the minimum wage.