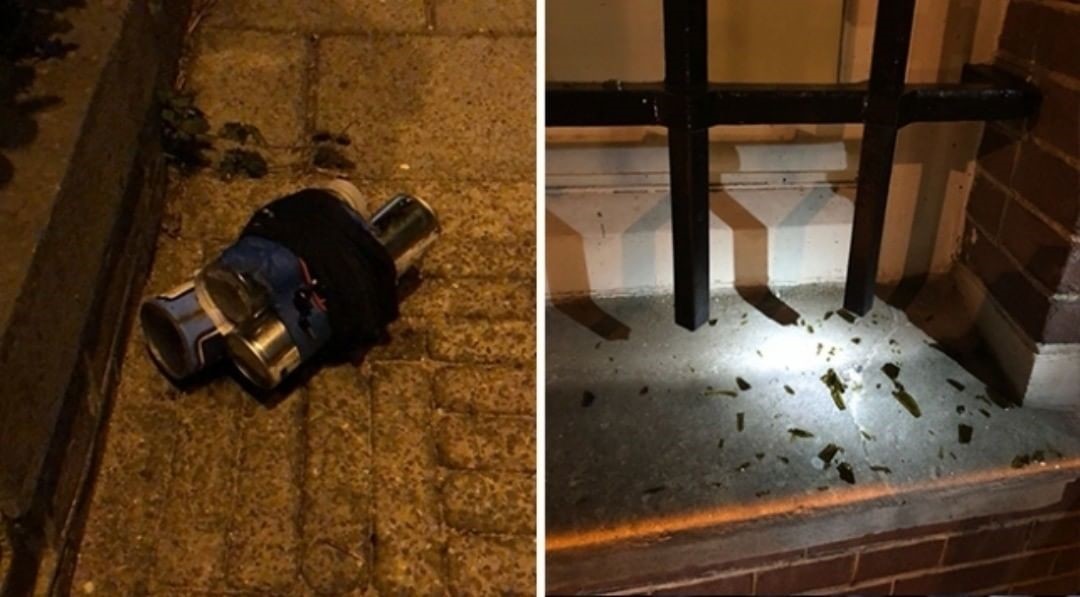 Combination of images shows the hand-made ecplosive device used by Polater to attack the Turkish consulate building.
by Daily Sabah with AA Feb 15, 2019 12:00 am

A court in the Netherlands handed down Friday a 16-month jail term to a PKK terrorist who attacked Turkey's Consulate General in Amsterdam in 2018 with Molotov cocktails.

Ercan Polater, who was initially caught in an anti-terror operation in the Netherlands but later granted refugee status, was arrested by Dutch police following the attack, which caused minor damage to the building and fortunately hurt no one.

The court said in a written statement that Polater was sentenced to 16 months in prison, six months of which will be imposed as a conditional sentence, on charges of deliberately attacking the Turkish Consulate General with three hand-made explosives.

The statement said that the court wanted his prison term to be less than the 20 months requested by the prosecutor in charge of the case, since no one was in the consulate or around the building during the attack.

The court said they gave the verdict by also taking into account Polater's previous offenses, namely when he was caught with two Molotov cocktails near the Turkish Consulate General in Germany in 2017.

He has been sought by Turkey since 2012 for his membership of the PKK terrorist group and has been on the Interior Ministry's red list of wanted fugitives.

The wanted list is divided into five color-coded categories, with red marking the most wanted, followed by blue, green, orange and grey, depending on the sensitivity of their criminal activity.

After being granted refugee status in 2004 by Dutch authorities, Polater traveled to other European countries and was arrested, but subsequently freed due to his protected-person status. In July 2012, Polater was arrested in Bulgaria on Ankara's request but not extradited to Turkey because of the same reason.