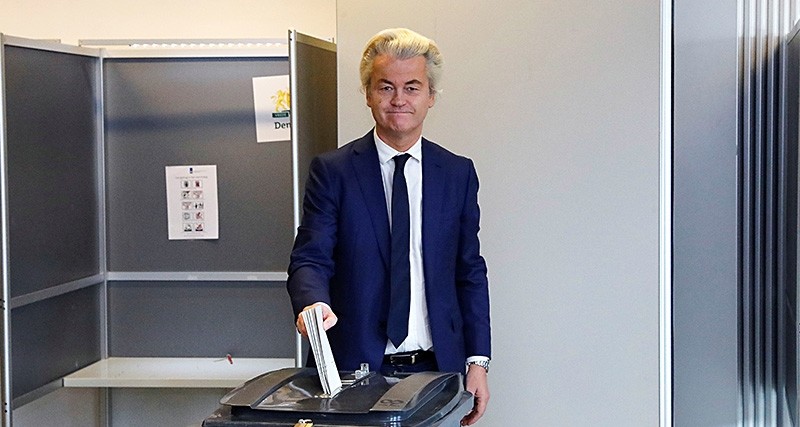 Dutch far-right politician Geert Wilders of the PVV Party votes in the general election in The Hague, Netherlands, March 15, 2017. (Reuters Photo)
by Compiled from Wire Services Feb 16, 2019 12:00 am

In their latest move to strip minorities of their rights and provoke xenophobia in the Netherlands, the far-right Party for Freedom (PVV) led by Geert Wilders presented a draft bill to the Dutch parliament to strip dual citizens of their right to vote and stand for election.

Wilders also shared the draft bill from his social media account, saying "No more active and passive suffrage for people with dual nationality. No double interests, loyalty or dependency more to other countries. The Netherlands is ours."

In his statement to public broadcaster NOS, Wilders said the proposal covers all dual citizens in the country but said the bill targets the DENK Party, established by two Turkish-Dutch politicians, which has three lawmakers in the 150-seated lower chamber of the Dutch parliament.

"If we can keep members of the DENK Party, which are dual citizens, away from the Dutch parliament, city councils and provinces, it would be a perfect outcome of this bill," Wilders said, describing the DENK as a "fifth column."

DENK's Parliamentary Group Chairman and leader Tunahan Kuzu said in a press release that the PVV aims to prevent 1.3 million voters from being heard. The Netherlands has 13 million eligible voters.

"DENK Party has been giving a strong and firm struggle against Wilders since 2014. As he cannot fight against DENK with democratic means, he presented a bill to silence our party's representatives. This act of hopelessness shows that time's up for Wilders," Kuzu said.

The discriminative move came after harsh debates between PVV and DENK members in the parliament.

Kuzu added that Wilders aims to make not only 600,000 voters of Turkish and Moroccan descent second-class citizens, but also 60,000 and 30,000 voters of German and Belgian descent.

Calling for all the Dutch to unite against this bill, Kuzu said "16 million Dutch cannot overlook a political party's discrimination by pushing aside 1.3 million voters."

Left-wing parties also described the draft bill as absurd and a threat to the Dutch society, according to the report of BCC Turkish.

Jesse Klaver, the leader of the opposition Green Left (GL), said that the "absurd" bill would polarize the Netherlands.

The Labor Party (PvdA) leader Lodewijk Ascher described PVV's proposal as "sad" in a Twitter post, saying "You can debate your ideas with your opponents in the Netherlands, Geert. Excluding groups based on their origins is not only a threat to their freedom, but to all of us."

Despite the optimism of Wilders that the bill will gain support, the PVV's proposal requires a constitutional amendment, which needs large public support before being voted in the house of representatives and the senate twice. A two-thirds majority is needed in all voting for the amendments to be accepted. Later, a parliamentary election is held for the amendment to be voted by the newly-formed chamber and is finally adopted.