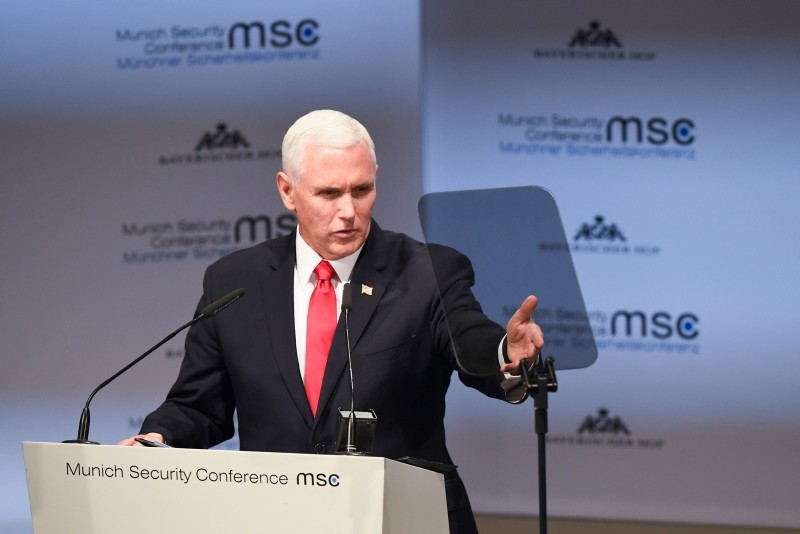 U.S. Vice President Mike Pence urged Saturday their partners in the European Union and NATO to follow their lead in various contentious issues including Iran, Russia, Venezuela and China, despite a recent U.S.-led Mideast summit in Polish capital Warsaw exposing their distance to Washington's policies.

Pence doubled down on his criticism of European nations working to preserve a nuclear deal with Iran, saying they should follow Washington's lead and withdraw from the agreement in his address at the Munich Security Conference, an annual gathering of top global defense and foreign policy officials.

Speaking Saturday right after Chancellor Angela Merkel defended the 2015 Iran deal, Pence said "the time has come for our European partners to stop undermining sanctions" by continuing to offer economic incentives in exchange for Tehran limiting its nuclear capability.

He says Europe should withdraw from the Iran nuclear deal "and join us as we bring the economic and diplomatic pressure necessary to give the Iranian people, the region and the world the peace, security and freedom they deserve."

"Iran is the leading state sponsor of terrorism in the world," Pence said.

France, Germany and Britain, as well as the European Union, Russia and China, have been struggling to preserve the deal since the U.S. pulled out last year.

However, in her speech at the conference earlier in the day, German Chancellor Angela Merkel robustly defended European powers' decision to stand by the Iran nuclear deal.

Merkel said the split over Iran "depresses me very much," but she downplayed the substance of the differences.

But "the only question that stands between us on this issue is, do we help our common cause, our common aim of containing the damaging or difficult development of Iran, by withdrawing from the one remaining agreement? Or do we help it more by keeping the small anchor we have in order maybe to exert pressure in other areas?"

The stance on Russia forms another issue of disagreement between the U.S. and most EU members, especially Germany, which are dependent on Russia in various issues including energy and trade.

Pence said that under President Donald Trump, the U.S. is holding Russia to account over Ukraine crisis, the poisoning of former Russian agents in Britain and a nuclear treaty that the U.S. unilaterally withdrew.

The U.S. earlier this month announced that it was pulling out of the 1987 Intermediate-Range Nuclear Forces treaty, accusing Russia of violating it. Moscow followed suit, strongly denying any breaches. The U.S. administration also worried that the pact was an obstacle to efforts to counter intermediate-range missiles deployed by China.

Merkel called on China to join international disarmament negotiations after the collapse of the Cold War-era treaty on nuclear weapons in Europe.

She said U.S. withdrawal was "inevitable" because of Russian violations, but noted the end of a treaty conceived "essentially for Europe" leaves Europe trying to secure future disarmament to protect its own interests.

Pence also called on Europe to stop the Nord Stream 2 pipeline currently under construction in the Baltic Sea. "America has stood strong against efforts to divide our alliance through political interference or energy resources. And we commend all our European partners who have rejected Nord Stream 2, and call on others to do the same," he said.

Merkel, however, is defending the development of the joint German-Russian Nord Stream 2 pipeline, dismissing American concerns it will weaken Europe's strategic position and assuring Ukraine it won't get cut off from Russian fuel.

Merkel told Ukrainian President Petro Poroshenko that his country would continue to be a transit country for Russian gas even after the Baltic pipeline is complete.

On security concerns, she says the question is "how dependent are we on Russian gas, and that has nothing to do with the delivery."

She says Europe also has enough terminals to receive more LNG fuel from the U.S., has its own natural gas and has other options, too.

She says "there's nothing that speaks against getting gas from the United States, but to exclude Russia is the wrong strategic signal."

In a veiled criticism to Turkey's decision to procure S-400 missile defense systems from Russia, Pence said: "The U.S. cannot stand by while NATO allies buy weapons from the East."

The vice president also called on NATO allies to increase their defense spending, in line with the stance adopted by President Trump.

As U.S. withdrawal from Syria looms, Pence said that the U.S. will keep a strong presence in the Middle East and vowed to track down Daesh terrorists. But the U.S. decision was not welcome by European partners, with Merkel questioning whether it's good for the U.S. to withdraw troops quickly from Syria "or is that not also strengthening the possibilities for Iran and Russia to exert influence there?"

Pence also called on the 28-member bloc to recognize opposition leader Juan Guaido as the president of Venezuela.

"All of us must stand with the Venezuelan people until freedom and democracy is fully restored," Pence said.

"So today we call on the European Union to step forward for freedom and recognize Juan Guaido as the only legitimate president of Venezuela."

Guaido, the head of Venezuela's National Assembly, declared himself president of the crisis-wracked country in January, piling pressure on elected President Nicolas Maduro.

Pence said that after the United States became the first nation to recognize the parliamentary leader as head of state, "52 nations including 30 of our European allies have followed America's lead."

"But it's time for the rest of the world to step forward," he said.

"Once more the Old World can take a stance in support of freedom in the New World. All of us must stand with the Venezuelan people until freedom and democracy is fully restored."

Although several European nations have recognized Guaido as the interim president after their snap election proposal was turned down by Maduro labeling it an "ultimatum," the EU stopped short of recognizing Guaido as a body due to opposition from member states and U.S. threats of using force to depose Maduro was widely rejected.

In addition to NATO member Turkey, Maduro also has the backing of Russia and China.

Chinese telecom giant Huawei was among the issues that Pence urged EU partners to take more action and take seriously "the threat" posed by as they look for partners to build 5G wireless infrastructure.

U.S. had been "clear with our security partners on the threat posed by Huawei and other Chinese telecom companies," Pence said

"[U.S.] provide Beijing's vast security apparatus with access to any data that touches their network or equipment (and) we must protect our critical telecom infrastructure."

He sayid "America is calling on all our security partners to be vigilant and to reject any enterprise that would compromise the integrity of our communications technology or our national security systems."