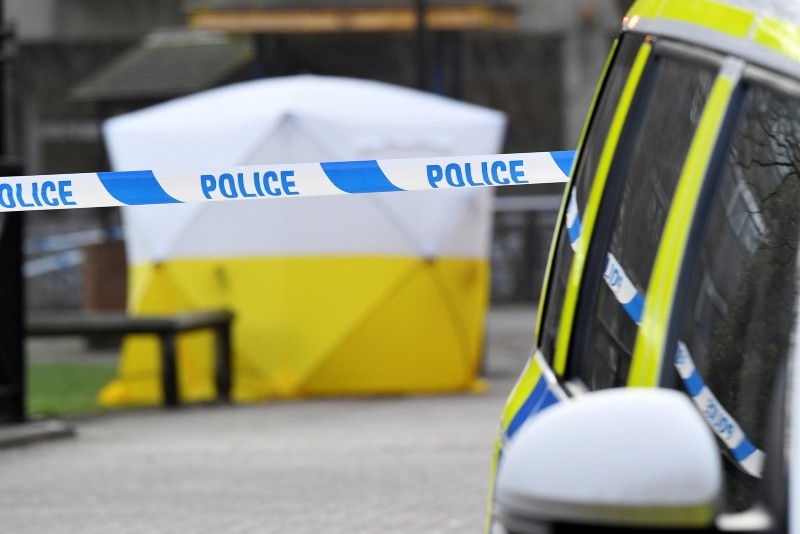 A police car is parked next to crime scene tape, as a tent covers a park bench on which former Russian inteligence officer Sergei Skripal was found unconscious in Salisbury, Britain, March 6, 2018 (Reuters Photo)
by Feb 16, 2019 12:00 am

Junior foreign ministers from Britain and Russia met in Germany on Saturday in the highest-level contact between the two countries since an alleged nerve agent attack in Britain last March froze diplomatic relations.

Britain's Minister for Europe Alan Duncan held talks with Russia's First Deputy Foreign Minister Vladimir Titov on the margins of the Munich Security Conference, according to the foreign office in London.

"Alan underlined that we have deep differences, and the Russian state would need to choose a different path and act as a responsible international partner before there can be a change in our current relationship with Russia," it said in a statement.

Duncan added his own reaction on Twitter, alongside a photo of the pair.

"While we remain open to a different relationship with Russia, we will continue to stand with our allies and partners in expecting Russia to play its full part in upholding the rules-based international system," he said.

The meeting is the first between ministers from the two countries following the poisoning of a former Russian spy and his daughter in the English city of Salisbury on March 4 which Britain has blamed on Moscow.

The attempted assassination of Sergei Skripal, which Britain said was done using a Soviet era nerve agent Novichok, plunged relations to their lowest ebb in decades.

The attack also led to the death of a British woman who came into contact with the Novichok, as well as injuring several others including a policeman.

Among a raft of responses, London suspended all planned high-level bilateral contacts between the two countries, and cancelled ministers and members of the royal family attending last summer's World Cup in Russia.

"(The) minister reiterated the U.K.'s and Allies' firm stance in response to the Russian state's reckless use of chemical weapons in Salisbury," the foreign office added in its statement.

"He made clear that Russia must address the concerns of the international community.

"This includes ending its destabilising activity in Ukraine; and the persecution of the LGBT community in Chechnya."

The foreign office said Britain would continue to "build and strengthen our cultural ties and people to people links with Russia wherever we can".

"The comment published (by London) does not correspond with the tone or the content of the meeting," it said.

The source added the British side had "stressed their desire for dialogue".

The last ministerial meeting between Britain and Russia was in December 2017, when former foreign secretary Boris Johnson met his Russian counterpart Sergei Lavrov in Moscow.

This weekend's talks took place as ministers from around the world, including those from the US, France, Britain, and Germany, are in Munich for a conference centred on global security issues.