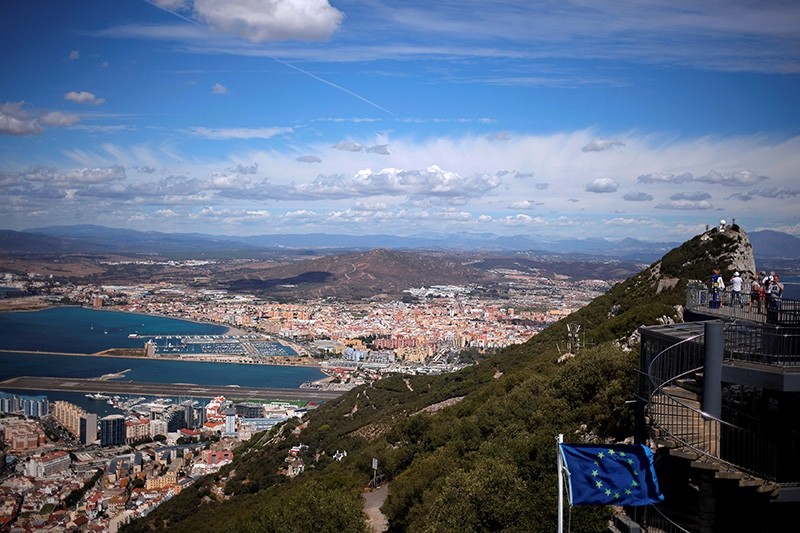 The Spanish city of La Linea de la Concepcion (rear) and tarmac of the Gibraltar International Airport (bottom L) sa tourists stand on the top of the Rock next to the EU flag, in the British territory of Gibraltar, Sept. 14, 2016. (Reuters Photo)
by Daily Sabah with DPA Feb 18, 2019 10:49 am

In a major standoff between Spain and the U.K., a Spanish warship with its guns manned ordered commercial ships to leave British Gibraltar waters Sunday, but was challenged by the British navy and sailed away, Gibraltar said.

Royal Navy vessels were deployed after the warship's crew were heard over a radio exchange telling commercial ships anchored at Gibraltar to "leave Spanish territorial waters," according to the Press Association (PA).

The Spanish ship tried to order ships to leave their anchorages on the eastern side of the Rock, but the ships stayed in position, Gibraltar's authorities said. After being challenged by the British navy, the Spanish warship then sailed slowly along the coast with its weapons uncovered and manned.

A spokesman for the British territory's government was quoted by PA as saying, "There is only nuisance value to these foolish games being played by those who don't accept unimpeachable British sovereignty over the waters around Gibraltar as recognized by the whole world in the United Nations Convention on the Law of the Sea."

Gibraltar, a tiny piece of land on the southern tip of Spain and under British control for 300 years, is a major bone of contention between London and Madrid. The naval dispute was the latest example of tension over the strategic port as Brexit approaches.

"It seems there are still some in the Spanish navy who think they can flout international law," the spokesman was reported as saying.

"This probably accounts for the state of extremism of some parts of the Spanish political spectrum these days," the spokesman added.

In the radio communication recording, a crew member on the anchored vessel asks the Spanish ship "to verify you are referring to our ship," saying: "We are not adrift – we are at anchor now." The Spanish ship then repeats its command to leave Spanish waters, according to British daily The Guardian.

The territory's government "is verifying every aspect of the incident in order to ensure that appropriate action is taking as soon as possible," the statement was reported as saying.

The rocky, 6.7-square-kilometer enclave at the tip of the Iberian Peninsula has been a British territory since 1713. Gibraltar is due to leave the EU along with the U.K. in March, although 96 percent of its population voted in the 2016 referendum to remain in the bloc.

The talks to determine the future of the British territory on the tip of Iberian Peninsula, which Spain has demanded returned for centuries, will decide whether its residents will take part in the benefits of the post-Brexit transition period.

For 21 months after Brexit, the U.K. will remain in the customs union and single market. Spain has already secured a right of veto over whether future Brexit arrangements can apply to Gibraltar. Prime Minister Pedro Sanchez held up an agreement on the U.K. withdrawal treaty last November over the issue and said Spain would seek joint sovereignty after Britain leaves the EU.

Madrid wants a bilateral deal that distributes some of Gibraltar's wealth to its surrounding territories. It also proposes joint management of the airport in Gibraltar and more cooperation on tobacco smuggling and tax fraud, in exchange for including the Rock in the withdrawal agreement.